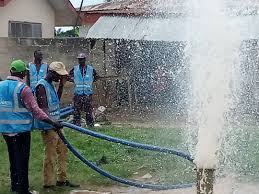 By Josephine Oguntoyinbo
|
No fewer than 750 boreholes have been rehabi-litated in about 300 communities through the “Kamomi Aketi Water Scheme flagged off early this year by the Ondo State government.

The General Manager, State Rural Water Supply And Sanitation Agency (RUWASSA), Engr.Rotimi Oladimeji stated this during an interview with The Hope.

According to him, eight local governments have been captured with 750 dysfunctional water facilities been rehabilitated.

He affirmed that the state governor, Arakunrin Oluwarotimi Akeredolu’s directive to carry out need assessment of existing water facilities across the state with a view to providing on the spot remedial and technical solutions on the water facilities has been yielding tremendous result.

The GM informed that the agency is targeting 3,000 communities across the 18 local government areas of the state.

“We have an approach whereby when we get to a community, the team will immediately solve the water problem because we are moving towards the dry season and we have to prepare the ground to ensure that the people of the state have access to potable water. That is why we are working day and night to meet the target.

Formerly, we had two teams that were working on the field, but we have increased it to six teams so that we can have larger coverage within the shortest time.

“Ideally, it is a year programme, whereby we have to cover all the local governments, but along the line, we are doing thorough inventory, need assessment, after this, we have to collate the areas that require boreholes and the areas that need expansion.

“The drilling we are doing now is for those areas that critically need water. Immediately after the inventory and studies, we will get the total number where intervention are needed including the locations and then submit our report to the state governor,” he explained.

Speaking on maintenance of the facilities, he said that the agency has scheduled a programme whereby the community people will be trained before handing over to them.

Oladimeji, who pointed out that when the teams are going on survey, drilling, and installation, the community people were always with them noted that committees were formed and trained to oversee and monitor the boreholes.

While saying that the local governments have equally been empowered by RUWASSA to ensure that the facilities are maintained, he said in case of serious challenge with breakdown of any facility, the agency will come for rectification.