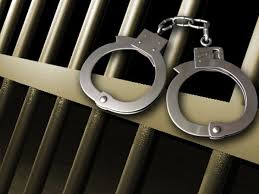 The trial judge, Justice Cornelius Akintayo, in his judgement, sentenced the convict after the court had listened to the oral evidence  of both prosecution and defence witnesses  including the arguments and submissions of all the counsel in the case.

He further held that the court exonerated the convict from the murder charge and armed robbery that were earlier levelled against him.

Ogunrinde, according to the charge against him, was tried on eleven counts of conspiracy, murder, kidnapping and armed robbery  But pleaded not guilty to the charges.

According to the charge sheet, the incident occurred serially between May 3 to May 15, 2015, at Epere Ekiti, Ido-Ekiti, Ado-Ekiti, Eyio Ekiti among other towns within the state.

An eyewitness (names withheld) who testified before the court said that on the fateful day, he and others were waved down along Ido-Ilogbo Ekiti road and were whisked to an unknown place, adding that they were made to trek barefooted  for several kilometers.

“On getting to the kidnappers camp, we met some women who had been abducted before us”.

“I overheard the kidnappers saying they don’t normally kidnap men, but stubborn ones, because I was also a man among the abductees, I was scared for my life “

“We were given concoction rice in the morning and eba at night. All together, we spent over 15 days in the kidnappers camp,” the victim narrated.

To prove his case beyond reasonable doubt, the prosecutor, Mr Idowu Adelusi, called five witnesses who testified that the convict was one of those that kidnapped them and that they were able to recognise his face vividly during their ordeals in the kidnappers captivity.

During the trial, the convict was given opportunity to call four witnesses, including some of the victims. But all denied knowing him.

Immediately after the judgement, the convict was immediately whisked out of the court by the officials of the Nigerian Prison Service (NPS).