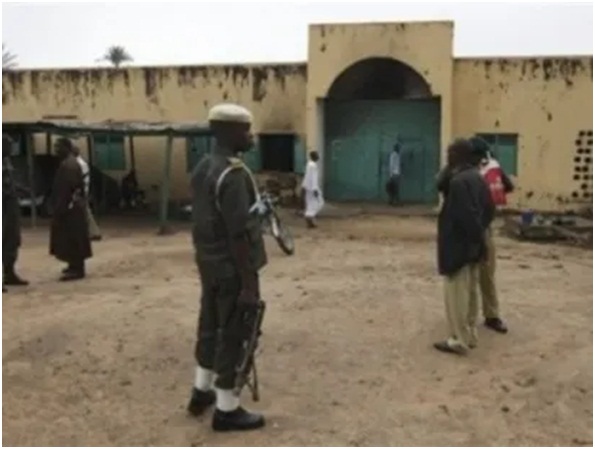 Following last Sunday jail break at the Medium Federal Correctional centre in Kabba/Bunu Local Government Area of Kogi State, the Ondo State Government yesterday directed all the security agencies to beef security in all the boundaries between the state and Kogi State.
To this end, heads of relevant security operatives in the state comprising of the Nigerian Police Force, the Nigerian Army, the DSS, the Nigerian Security and Civil Defence Corps, NSCDC, Amotekun Corps and local Vigilante operatives in the State have been drafted to man affected boundaries.
However, this is coming as prisons authority claimed it had apprehended 108 out of the escaped inmates.
Speaking with The Hope Metro in an interview, the Senior Special Assistant to the Ondo State Governor on Security Matters, Alhaji Jimoh Dojumo, said Governor Oluwarotimi Akeredolu has given a matching order and directive to all security agencies on the need to effectively secure the boundaries between Ondo and Kogi States.
“It has become important for the security agencies in the state to be on red alert, following the last Sunday’s jail break in Kogi state where some persons were killed and prisoners set free by some gunmen who reportedly attacked the medium Federal Correctional Centre in Kabba, Kogi State,” he explained.
Dojumo hinted that traditional rulers and community heads have been incorporated into the security scheme of the state, hence they are expected to work with security agencies by giving useful information to them to prevent crime before it occurred.
This, according to him, informed government’s emphasis on visibility policing whereby policemen are seen in most strategic locations scaring criminals away.
The SSA said security personnel carefully selected from reliant security forces in the state have been drafted to the affected boundaries especially in Akoko axis to keep their eagle eyes on the boundaries to prevent any unsuspecting criminal incursion into the state.
His words, “I led some security Chiefs to access the affected areas and we have drafted armed security personnel to keep surveillance and patrol in the boundaries between Ondo and Kogi States.
“When a crime of this nature happens in a neighbouring state, it becomes important for states sharing boundaries with such state to be on alert and that is what we have done
“We share boundary with Kogi State, especially from Akoko axis and we have visited those flash points and drafted joint security personnel to those identified areas and I can assure you that there is no cause for alarm. People should not panic and should go about their respective businesses without any fear of attack.
” Since the inception of the Akeredolu-led administration, the government has taken issues bordering on security of lives and properties of the people seriously and we are not relenting in our efforts in nipping crime in the bud.”
On the last incident where some Lagos-bound passengers were reportedly kidnapped along Akunnu in Akoko Northeast local government of the state, Dojumo said the presence of security men have been increased to further strengthen security in the area.
He said some of the measures taken are not for public consumption. Het assured motorists traveling along Akunnu /Akoko road that their safety is guaranteed.
It will be recalled that unknown gunmen attacked Kabba Medium Federal Prison, killing some military personnel at check point before overpowering prison officers on duty.
The Assistant Inspector General of Police in charge of Zone 8 in Lokoja, AIG Ayuba Ede who confirmed the unfortunate incident, said efforts were on to track down the hoodlums and apprehend the fleeing inmates and bring them to face justice.
Some of the escapees were those standing trials and awaiting trials from various offences ranging from murder, attempted murder, armed robbery, rape, kidnapping, Arson and other violent crimes.