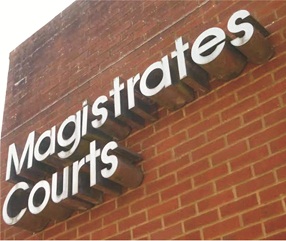 By Kayode Olabanji
|
A 27 -year-old farm labourer, Lawrence Olajide, has been ordered to be remanded in Olokuta prison custody by an Akure Chief Magistrates’ Court sitting at Oke-eda, for alleged armed robbery.

The accused person was brought before the  magistrate, Mrs Victoria Bob-Manuel, on a two-count charge of conspiracy and armed robbery.

According to the prosecution, the accused and others at large committed  the offence on  March 20, 2019 at about 1:15am at No1, Isiaka street, Etioro, in the Ondo state Magisterial  District.

Olajide, and others at large were  alleged to have been  armed with cut to size barrel guns, cutlasses, axe, iron rod and other offensive weapons, while they attacked and robbed one Omoniyi Mohammed  and Olajunigbe Toyin of the following items; jewelries valued at N40,000, one Tecno KA handset valued at  N41, 000, and one Nokia handset valued at N6,500.

The alleged offence was said to be contrary to and punishable under section 6, (a&b) and 1,2 (a&b) of the Robbery and Firearms(special provision) Act Cap. R11 Laws of the Federation of Nigeria 2004.

The plea of  the accused when the charge was read to him.

The prosecutor, sergeant Suleiman Abdullateef, prayed the court to remand the defendant in prison custody pending the  advice from the Director of Public Prosecution.

Lawyer to the accused, Mr M. L Samuel did not oppose  the remand application made by the prosecutor.