Ladies, can you fight over a man? 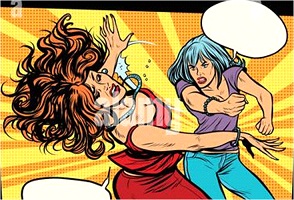 Handsome boyfriends are hard to come by. Any lady lucky enough to get one for herself jealously guards her copyright as we live in a society where ladies abound and the guys ; whether ugly or handsome are not enough to go round.

Kenny as  he was popularly called is unarguably the most handsome dude in our neighbourhood. Girls fall over themselves to get his attention. He was a very cool and courteous  personality. All these added to his allure. While other guys his age were abrasive and  bumbling, he was a cool customer.

In spite of his popularity, he never allowed it to get into his head. He has only one girlfriend;. Joke. She is the envy of all the ladies in our neighbourhood as they wondered how she was able to get his attention and maintain it.

The lovers are like the proverbial snail and its shell; wherever the snail crawls, the shell follows. Wherever Kenny is, Joke would be close by and vice versa.

While other ladies were envying her the good fortune which providence had unwittingly dropped in her laps, she does not believe herself to be worthy of such good luck.

She was a nag and she accused her lover at the slightly whiff of suspicion. They often quarrel due to her suspicion.

Her ire would rise whenever she saw him being his usual pleasant self with other ladies. She is a woman that is naturally worrisome. No doubt she loves her  man but seeing girls flock around him in a bid to get his attention gives her  headache.

She was always restless whenever she sees him talking with any girl. She was a regular visitor at his home so that no interloper would take over her place. Sometimes, she even sleeps over at his apartment.

Trouble reared its ugly head in their paradise when one sassy Benin girl caught Kenny’s eye.

Joke had gone back to school. He had a breathing space. The girl was the opposite of Joke. She was fair andtall while Joke was dark and of medium height.

She came back from school before their break. Her boyfriend was not expecting her just yet and was having an exciting time with his new find when Joke suddenly discovered the two of them in intimate mood inside Kenny’s room.

Joke saw red. Her fear was materialising. She was livid as she glared at them both. She demanded “what is happening here? What is this slut doing on your laps? So this is what you do when I am in school?”

The guy, who shocked and speechless, quietly removed the lady sitting on his lap and moved towards Joke in a conciliatory move.

But the girl was having none of that as she pulled him on the chair and faced Joke “who did just called slut? Are you in your right senses? How could you just barge into a room like an untrained dog?”

Joke’s temper boiled over and she dealt the girl a stinging slap on the cheeks. She was spoiling for a fight. The other girl, not to be outdone retaliated and a serious fight ensued.

They tore at each other like savages. They bit themselves and snarled like bitches. They hurled themselves all over the room breaking everything they came in contact.

Kenny could not separate them. They fought viciously as if their lives depended on it. He was beside himself as Neighbours gathered to watch their show of shame.

Residents, especially the youths were excited to watch the chicken fight. Joke, however overpowered the Benin girl and she left with a threat to be back in big form.

She made good her threat when she came back an hour later with ten hefty girls on motorcycles.

Joke wisely stayed away as the girls raged and called for her head. Kenny had slipped away when he tried to pacify them and they refused to see reason.

They cursed and raged. It was a dramatic scene and the neighbourhood buzzed with the scandal for days after.