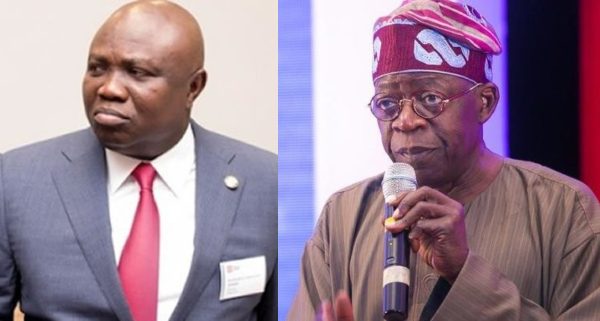 By Samuel Alonge
|
For septuagenarian Cardinal James Odunmbaku, popularly known as ‘Baba Eto’ in Lagos politics, the day broke before time. Party faithful had as early as 3am swarmed his hotel abode at the Allen Avenue area of Lagos, not necessarily to pay obeisance, but to hatch a plot, in the rush hour. It was the day finally scheduled for the Lagos All Progressives Congress (APC) primary election. The all-important elementary poll had been postponed three times. And at last, the final hour came.

Yes, there was a rock of Gibraltar in Asiwaju Bola Tinubu, the APC National Leader and ‘Final Word’ in Lagos politics who had assured all that he had mapped out his strategy to show the Lagos State governor, Mr. Akinwumi Ambode, the exit door.

For Tinubu, Ambode had overstayed his welcome and no amount of entreaties could save him from losing out of the second term race, for as long as the latter remained in the APC. On why Tinubu, the Jagaban Borgu of the popular Borgu Emirate of Niger State, took this hardline position, is a story that shall suffice shortly.

However, on the day finally slated for the APC primary election, there was palpable anxiety in the Tinubu camp, a camp that had already taken a step of no return in the candidature of Mr. Babajide Olusola Sanwo-Olu, the General Manager of Lagos State Housing Development Authority, a parastatal under the Ambode administration.

The reasons were not far-fetched. In the first place, history was about being made as, apart from Chinwoke Mbadinuju who was a sitting Peoples Democratic Party governor in Anambra State who lost a re-election ticket during the President Olusegun Obasanjo administration, no known sitting governor had been recorded to have kissed the dust in that fashion. Still to the fear, shortly before the party’s primaries, the streets buzzed with the rumour that Ambode had earmarked N35 billion to influence voters in the party’s direct primary election. This staggering figure, if it was real, it was feared, could sway most of Sanwo-Olu’s already fattened prospective voters. But the Ambode men immediately came out to dispel the rumour, and their denial was later made belief as some Tinubu die-hard supporters in the civil service helped farm out necessary files with no supporting details of any slush money.

Even if the Ambode misfortune of not securing a second term ticket was considered unprecedented, it would seem that not much thought had been given to the fact that since 1999 when Tinubu started out as Lagos governor, no deputy governor had secured a second term ticket.

In fact, in the Tinubu eight-year reign as governor, there were three deputy governors in which his first deputy, Mrs. Kofoworola Bucknor-Akerele, and her successor, Mr. Femi Pedro fell to ‘political palace coup’ in their times.

In the tenure of Babatunde Fashola who succeeded Tinubu, there were two deputy governors in succession. Mrs. Sarah Sosan was deputy in the first tenure, while Mrs. Joke Orelope-Adefulire had her turn in the second tenure.

Indeed, Fashola nearly lost his second term bid but for what re-collectors described as his political sagacity and the intervention of Tinubu’s mum, Alhaja Abibatu Mogaji, of blessed memory.

At the Lagos APC governorship primary, however, it was a crushing defeat for Ambode, who despite last-minute protest of discrepancies in the list of voters, was simply humbled. Sanwo-Olu defeated him with a ‘scandalously’ wide margin. Apparently faced with inescapable realities or possibly acting in his strides, Ambode accepted defeat and embraced Sanwo-Olu, promising to remain in the party.

By why, unlike Fashola, did Ambode fail to sing an effectual lullaby for Tinubu, widely famed as the Lion of Bourdillon? (the APC leader resides in the Boudillon area of Ikoyi, Lagos). Why did Tinubu not forgive the governor ‘his sins’, after much pleading, reportedly from President Muhammadu Buhari, state governors and traditional rulers?

Sources in the Lagos APC offered some possible causes. Some pointed at the governor’s alleged exclusionist policies, in which key party leaders and members were sidelined to the advantage of ‘strangers’, who dictated affairs of his administration.

“Even there were occasions that Tinubu would invite him for talks and he would tell the former that he was busy; not just that, there was a day Baba Eto (Odunmbaku) was delayed for a whole day, whereas the governor was in the office and the old man had to leave dejectedly, unattended to,” said an APC leader who craved anonymity.

Another issue cited for Ambode’s fall was the scrapping of the Private State Partnership (PSP) environmental sanitation agency said to have been ceded to Odunmbaku, for the upkeep of loyal APC members at the very bottom of the ladder. Indubitably, Odunmbaku, the Cherubim and Seraphim top cleric in Lagos, is Tinubu’s unspoken political deputy. In the place of the PSP, Ambode introduced Cleaner Lagos Initiative, placed under the control of Visionscape, an environmental firm of which Tinubu had no idea. But from all indications, however, the Cleaner Lagos Initiative failed to gel, as under it, Lagos was dirtier with heaps of refuse and putrefying odour, as evidence.

Yet, a sensational dimension was added to the Ambode political trajectory, as some people attributed his inability to secure another term to the friction that once occurred between his wife and the Government House chaplain. The said cleric was sacked from the Government House allegedly for ‘dishonouring the governor’s wife by not attending to her during anointing service.’ “After the man was sent away, he looked up unto heaven and said ‘God, if truly I serve you, let this tenure be the last here for this couple’,” a civil servant, who claimed to witness the scenario, recalled.

But a top Lagos politician who would not reveal his identity, owing to the sensitivity of his revelation, sneered at all the earlier reasons adduced to Ambode’s fall. Rather, he said a newspaper publication caused the governor’s downfall.

“You people should know that Tinubu has the milk of human kindness flowing in him; he would have forgiven Ambode after so much pleading, especially coming from President Buhari and the governors. But Ambode himself actually went too far and is often childish,” he averred.

According to this top source, shortly after Tinubu announced that he would not back Ambode for another term, a story suddenly came out on the front page of one of the leading national dailies and it was suspected to have been sponsored by the governor. The story stated that companies linked to Tinubu in Lagos owed corporate and individual taxes to the tune of N1.6bn.

The said national daily, according to the source, is owned by a late Delta State businessman whose family is a dynasty, and which Buhari likes to read first, possibly because of an age-long goodwill. “The President first reads this newspaper before any other,” the source stressed.

Speaking further, the source said a few days after the publication, a counter story came out in the dailies that the companies had finally settled their N1.6bn tax default. “And with that, Ambode knew that he had started a war that he could not win,” he revealed. The source then asked, “If you were in Tinubu’s shoes, and a ‘boy’ you brought from nowhere to become governor set such a trap to disgrace you, making you to lose a huge sum in the process, would you forgive him?”

Though Ambode has been eased out, he seems to be currently at the pinnacle of popularity among many Lagosians who see him as a notable achiever, especially through his massive infrastructure that include modern pedestrian bridges, heavy road construction and lightning up of Lagos streets. Not a few also see him as a victim of political conspiracy, without consideration for his service-delivery values.

But reacting to a common fear that Sanwo-Olu, after victory, may discontinue with Ambode’s unfinished capital projects,  the APC governorship candidate’s spokesman, Mr. Sesan Daini said, “This is not so.”

“In fact, if Lagosians vote us in, we will not only finish up all pending projects, we will also initiate many lofty projects that will put smiles on the faces of our people. But what we will do is to review the projects, to know if they need some modifications or expansion,” Daini explained.

Away from the APC politics however, the main task before Sanwo-Olu is how to battle the candidate of the Peoples Democratic Party (PDP), Mr. Jimi Agbaje, in the coming election.

Agbaje, an old horse, will be coming out for a record third time and he is being feared to create some upset, amid apprehension in the Sanwo-Olu camp that he may get a midnight backing from a ‘wounded’ Ambode. But consistently, the Lagos governor has insisted that he remains a loyal APC member, in spite of losing at the primary poll.

In his acceptance speech after he emerged the PDP candidate, Agbaje said his decision to contest for the post was to free Lagos from “the disease that has constantly affected its growth.”. He did not expatiate on this.

However, as the parties in Lagos begin their campaigns this week (next week), the battle, which is going to be largely between the APC and the PDP, promises to be breath-taking.