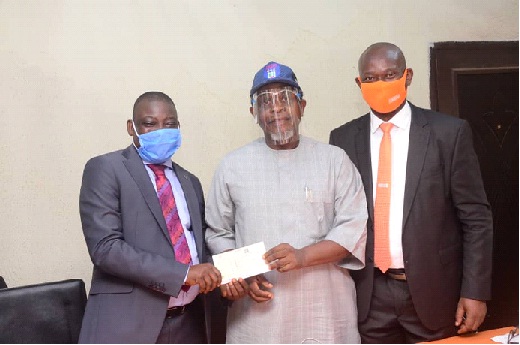 Ondo State Internal Revenue Service has shared the sum of N100 million between the State and the 18 Local Governments being the sum collected as Land Use Charge between January and May, this year.
This was in line with the mandate delegated to ODIRS for the levying and collection of Land Use Charge in the State and sharing same between the State and the 18 Local Governments in accordance with the sharing formula provided for, by the Land Use Charge law 2014.
It would be recalled that the Land Use Charge Law was passed by the Ondo State House of Assembly in 2014 and assented to by the then Governor.
Although the implementation commenced immediately, no fund was shared with the 18 Local Governments of the State up until 2018.
During the presentation of the cheque at the state Ministry of Local Government and Chieftaincy Affairs, the Executive Chairman, ODIRS, Mr. Tolu Adegbie, explained that the sum of N317.6m less initial set up was shared between the state and the local governments in 2018 and 2019.
The cheque for the State share was presented to the Accountant General of the State while the state Commissioner for Finance, Mr. Wale Akinterinwa, presented cheque for Local Governments to the Permanent Secretary, Ministry of Local Government and Chieftaincy Affairs, Mr. Segun Odunsanya in the presence of Ondo State Joint Allocation Account Committee (JAAC) members.
Presenting the cheque, the commissioner said the present administration has consistently shown transparency and accountability in all facets of governance, adding that government is showing good example by living up to the expectation of sharing the Land Use Charge funds between the Local Government and State Government.
Responding on behalf of Joint Allocation Account Committee members, Mr. Toyin Ajagunmale, appreciated the Executive Chairman of ODIRS, Commissioner for Finance and the state government for their commitment and kind gesture.
He particularly commended Governor Oluwarotimi Akeredolu, for his accountability and transparency in the management of the Land Use Charge and the State affairs as a whole.