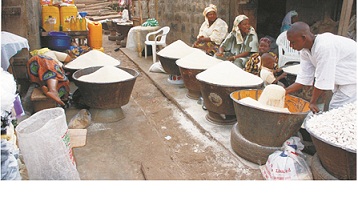 Lassa Fever: We can’t do without  garri – Diehard consumers

By Kemi Olatunde
|
Contary to the fears in some quarters that  due to the increase in the incidences of Lassa fever, garri, a commong stable among Nigerians would become a rejected commodity, the product is much sort after .

The indication emerged this week, when The Hope Correspendent went round to feel the pulse of the Garri traders on the outbreak of the disease. Although some residents claimed to have restricted themselves from  consuming  the food item.

One of the ways identified as the major source of the disease is the consumption of Garri that has been exposed to unnecessary sun dry  or urinated on by rat.

At the popular Oja Oba market in Akure, a garri seller, Mrs Veronica Ajetomobi who according to her has been in the business for decades has a different perception on  the fact that garri is one of the ways through which the fever is contacted.

To her, it has come from the pit of hell, noting that there was never a case of it in the olden days.

Her words; “I don’t believe that garri is one of the causes of Lassa fever, Satan is the one spreading it but all should pray to God to take it away.

” When we were growing up, our mothers in those days used to give us garri a lot. We took it to school as lunch  and even ate  it as snacks with our friends but now that Satan is in operation, it has been said it  brings  Lassa fever. “

Asked if the outbreak has reduced their sales as claimed by some residents , she explained that there has not been any difference in their market, noting that price for different quantities of the item has increased.

“Garri is an easy food. Our customers have been coming around to patronise us as usual, in fact, we have more people buying now but we have been telling them to imbibe good storage culture. In December, 2019, we sold a rubber of garri for N120 but now it is sold for N150 because a load of cassava from the farm has increased. At times, it is difficult to get garri to buy from our suppliers due to the price.

” We have been advised to sell garri in covered containers in the market which most sellers have  complied with.

“I no longer store my garri inside sack, I put it in  covered containers for proper preservation.”

She advised government to always visit those involved in the preparation of garri especially at the villages to ensure that it is well done and preserved, so as,  to prevent the disease in the state.

She  also advised residents to purchase the item in neat environment and added that it should be well kept away from rats in their various homes.

Also speaking with The Hope in one of the garri factories in Akure, a middle aged woman who simply identified herself as Evangelist Aturabi and was seen frying fermented cassava to make garri lamented the rise in price of cassava from the

According to her, the garri being done in the factory is well prepared and devoid of rats  urine  noting that the people involved fry the quantity that will be enough to sell out in a day.

She explained that a rubber in the factory sells for N250 saying “we are very sure of the garri we sell here and we can assure you that we don’t encourage leftovers which can be eaten by rats.

” Our garri is well packaged. We ensure that it is well covered as soon as we remove it from the frying pot and most of the time, we sell directly to consumers as it is being removed from the pot.

“We don’t preserve our garri here because we make sure we sell everything we fry in a day. We have a limited quantity we sell on daily basis except on demand.”

When asked the reason behind the differences in price from what obtains in the markets, she said  “we ensure that the cassava  is  well fermented and we fry it between eight to ten days after grinding unlike others seen elsewhere. Ours don’t have any starch in it and it can be taken especially soaked without the addition of any complement.

A farmer who specialises in the supply of large quantity of garri to customers in Ilu-Abo, Akure North Local Government, Mrs Tayo Tapere stated that the outbreak of the fever has incapacitated her from producing and storing the food item for her customers.

Tapere who noted that although she is yet to begin the processing of the item in the farm said she plans to sell directly to consumers as soon as her cassava is available.

In Oke-Agbe Akoko,  in Akoko South West Local Government Area of the state,  cross section of those who spoke with The Hope said that the fever has not in anyway affected their sales.

A 32-year-old provision dealer, Mrs Bisi Adeyemo explained that the outbreak of the fever has forced her household to avoid the consumption of garri in recent time, noting that “it has even become an error for anyone in our house to mention  it  not to talk of buying or even consuming it in any form.”

When informed by The Hope that people cannot be infected with the fever if the garri is used to prepare ‘Eba’ which should be properly heated and turned while still on fire, Adeyemo simply asked; “what if I prepare my Eba  and still contact it? It means my case becomes an exceptional one. It is better I avoid everything relating to garri now to prevent future regret.”

Another resident, Mr Adebayo Adeleye who identified himself as an health worker revealed that although he is adequately equipped with the required knowledge on Lassa fever, he still have  his reservations due to the nature of most sellers of the food item.

Adeleye, a lover of garri as her claimed, stated that his appetite for it has reduced drastically in order not to become a victim of the fever.

According to him, “no matter how satisfied with meals prepared by my beautiful wife, especially my dinner, I must take garri before I can have a pleasant rest at night. I grew up with garri maybe that is why I like it so much, but I have limited the way I order for it. I am from one of the local governments where Lassa fever is detected  and that is why I took  caution.”