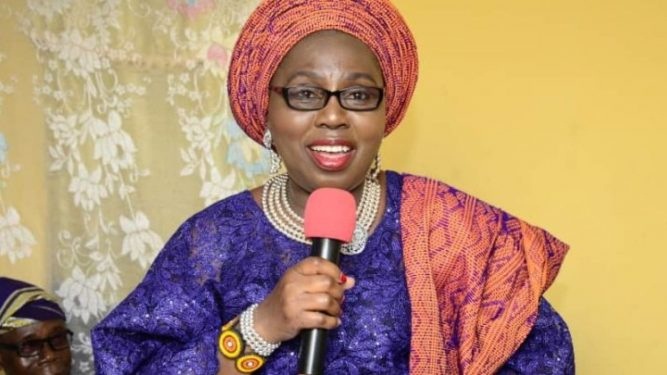 No fewer than 12 schools in Ibadan, the Oyo state capital participated in the Inter-School Arts competition organised by the Breast Cancer Association of Nigeria, BRECAN to climax the World Cancer day celebration in the state, themed, “HOPE, a message to Cancer Patients”
At the event which was held at the Law Hub Ring Road Ibadan, the Founder of BRECAN and wife of Ondo state governor, Arabinrin Betty Anyanwu-Akeredolu reiterated her commitment to fight breast and cervical cancer, with the support of volunteers.
She frowned at late presentation of breast cancer by women, while condemning the activities of churches which contributed to rate of death due to belief in miraculous healing.
She said: ” I’m kind of demoralised; even in this Ibadan the headquarters of BRECAN, UCH is here but women are still presenting their cases late because they keep going to these churches and they are messing up our efforts. When the breasts of these women have rotten, the man and woman of God will run away.
“Let our women listen, breast cancer is the easiest cancer you can handle this days due to the amount of research that has gone into it. Breast is external, check it, go to hospital and stop this mountain climbing, it has to stop in this country because I feel angry talking about late presentation in this country”.
Appreciating the schools and individuals who had been associating with BRECAN’s mission, Mrs Akeredolu described advocacy as a labour of love, noting that service to humanity was about volunteering.
The BRECAN Founder who narrated the contribution of some schools in Ibadan to the awareness campaign of breast cancer in the state when the association was just a lone voice in the wilderness, said the school children weren’t too young to join the advocacy.
The wife of the governor, who said BRECAN’s journey was full of ups and downs, was highly elated at the spate of its progress in Oyo state.
Informing the gathering about the readiness of BRECAN to also champion cervical cancer advocacy, the Ondo first lady emphasised the need for massive awareness to eliminate it, saying it is the type that can be prevented 100 percent.
According to her, the Inter-School Arts competition was aimed at creating awareness by targeting the young ones who parents would be enlightened and give their consents to the cervical cancer vaccination.
The Chairperson of Oyo state chapter of BRECAN, Mrs. Tolu Taiwo noted that the competition was another form of awareness about the disease in another dimension.
According to her, 12 schools participated in the Arts works competition through which they all passed information about breast cancer with drawings.
She said , “we are trying to introduce something different to pass message across, not only in words, but you can put all your thoughts into arts, that’s why we have chosen HOPE as this year’s theme”.
At the end of the competition, All Saints College emerged first, followed by Seed of Life College, while Lead City International College came third.
They were given Trophies and certificates of participation by BRECAN and cash gifts by supporters.