Lawmakers-elect get Certificates of Return 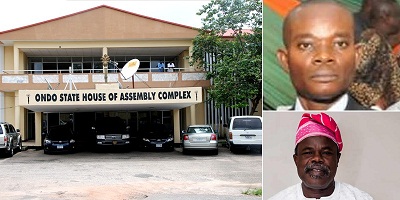 Lawmakers-elect get Certificates of Return

…Adetimehin, Dairo, others confident in members-elect

By Adekola Afolabi
|
The Resident Electoral Commissioner in Ondo state, Rufus Akeju, yesterday officially presented Certificates of Return to all the 26 House of Assembly members-elect in Ondo state.

Presenting the certificates to the lawmakers-elect in Akure, the Ondo state capital, Akeju who congratulated the members-elect also advised them not to disappoint the voters who sacrificed their comfort and time to give them their mandates in their respective constituencies during the poll.

The REC explained that the presentation of Certificates of Return to the lawmakers-elect was a manifestation, recognition and confirmation of their electoral victory.

He expressed satisfaction over the successful conduct of what he called a keenly contested election which produced the legislators-elect.

Out of the 26 lawmakers-elect only one member, Tomomewo Favour, from Ilaje State constituency 2 is a female, while the 25 others are males. The APC won 23 of the 26 seats, while the PDP won two and the ZLP one.

Also, eight (8) incumbent lawmakers were re-elected while the remaining 18 were new.

Meanwhile, the State Chairman of the APC, Ade Adetimehin and the former PDP chairman in the state, Dr. Tayo Dairo have expressed confidence in the ability of the lawmakers designate to perform their legislative duties excellently well in line with the constitution to move the state forward.

Adetimehin who described the members-elect as men and woman of impeccable characters and good antecedents, also added that he is quite sure that they would not disappoint the people but serve their state and constituencies very well.

According to the APC chairman, the new members-elect would not in anyway be rubber stamp to the executive.

On his part, former PDP chairman in the state, Tayo Dairo said he believed the new set of the legislators would perform much better than the outgoing ones, adding that even though the APC has majority members, the minority would still make their own impact to collectively develop the state.

Speaking with journalists after receiving their certificates, some of the lawmakers designate including the incumbent Speaker of the Assembly, Bamidele Oleyelogun from Ifedore constituency and Mohammed Oladele from Akoko North-West constituency 2, promised the people of the state that they would justify the confidence reposed in them by making good laws that would further develop the state.

They particularly appreciated the people of the state for voting them during the Assembly election, saying that the legislative arm would continue to work with the executive to ensure that the people continue to enjoy real dividends of good governance in the state.

The event was attended by INEC officials, leaders of various political parties, heads of security agencies and friends and families of the lawmakers designate.