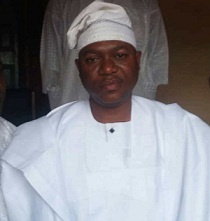 From Jimoh Ahmed, Owo.
|
Nigeria will be a better place to live, when leaders see leadership as selflessness and service to the generality of the people and not that of selfishness and personal interest.

The newly installed Olowo of Owo, His Imperial Majesty, Oba Ajibade Gbadegesin Ogunoye III stated this while receiving some representatives of National Association of Ondo State Students, NAOS who paid him a congratulatory visit in his palace.

Oba Ajbiade Ogunoye charged the student representatives, comprising mainly the student union presidents from across the tertiary institutions from within and outside the state to lead by example and always think about those they lead first.

The Olowo enjoined them to unite for a better academic and personal benefits and achievements.

The monarch advised them to always use dialogue to achieve their agitations and demands from the government rather than embark on confrontations.

He assured them that the present administration in the state has a man who has listening ears in charge.

Meanwhile Oba Ajibade has commended the Special Assistant to the Ondo State Governor on Students and Youth Affairs, Banji Adewumi for bringing together students in the state.

The students were led by the Special Assistant on Students and Youth Affairs, Mr Banji Adewumi during the visit.