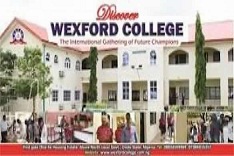 By Bukola Olamona
|
The outgoing students of Wexford College, Oba-Ile have been charged to be willing to take risks,lead by example, work hard and play safe anywhere they find themselves.

The proprietor of the school, Mr Adeolu William gave the charge in his welcome address during the end of session/sendforth programme and the launching of the 2nd edition of the college’s year book.

Adeolu who said the journey of a thousand miles begins with a step said their determination and steadfastness have kept them all together since they started from year 7 about six years ago.

According to him,” each day, we focus on our goal to nurture and bring out the best in you and we have made some memorable moments together.

“You all are ready and more than able to grasp the torch that we bestowed upon you .

“Yours is the future and on you the world will come to depend,” he stated.

Adeolu ,while charging the other students said it is not over until it is completely over, saying that they should wax stronger, not  relent in  their effort and make the remaining years memorable with hard work, as hard work does not kill, but makes one strong

He admonished them to keep striving for success, adding that preparation prevents poor performance by putting in their best so that they can achieve success.

Earlier, the chairperson of the event who is the General Manager, Inspiration Radio 100.5 FM, Ibadan, Mrs Olufunmilayo Olasogba thanked the school for changing the orientation of parents that only through science subject can students make it in life but that they can also make it  through Arts too.

She said what they offer is all round education that brought out the best in the students.

Also ,the former Head of Boarding ,Mr Olugbenga  Adenekan admonished them that the outside world is delicate, hence the need to thread softly with the mindset of putting God first.

He  said that they should not forget where they come from as their parents have toiled, labour to see them succeed, saying “please  repay them back by being good ambassadors of both your parents and the school”.

In another development, the Media team of the school as part of its periodic media project in the session paid a courtesy visit to the parents of one of their former student, Tilewa Ajao at their Ondo city abode.

Tilewa Ajao had distinguished himself as the best graduating student from the Department of Mathematics and Computer Science at Elizade University, Ilara Mokin.

The father of the former student, Mr Taoheed Ajao said the school has been able to lay a solid foundation for their students’  excellent academic performance through the provision of accurate and relevant ICT gadgets and effective teaching methodology.

Also speaking, former Governor of Ondo state, Dr Olusegun Mimiko commended the proprietor of the school for daring to position excellence above profit making which is the motive of most proprietor of today.

Responding ,the proprietor, Mr Adeolu William appreciated the host and the former governor for their observations,kind words and good wishes.