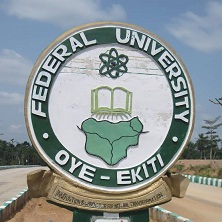 Victor Akinkuolie, Ado-Ekiti
|
The lingering crisis between the Management of the Federal University Oye-Ekiti, (FUOYE), and the Academic Staff Union of Universities (ASUU), Akure zone, took another dimension as some leaders of the union threatened to resign en masse from the employment of the University.

Speaking at a press conference jointly in Ado-Ekiti, a spokesman of the lecturers, Prof. Patrick Okechukwu Okolo,  said they might resign from the institution if there is no solution in sight.

While identifying ethnic differences as the root cause of the impasse, he equally condemned the attitude of the Head of ASUU, Akure zone, Prof.Olufikayo Olu and the FOUYE local chapter, Dr. Biodun Omonijo, for regarding the Vice-Chancellor of the University, Prof. Kayode Soremekun and many other non-indigenous staff as outsiders who shouldn’t have a stake in how a federal institution such as FUOYE sited in their domain should be  run.

Okolo described the crisis as a conspiracy of the indigenous staff led by Olu Olu and Omonijo to destabilize FUOYE, saying: ” Olu and Omonijo are using the union to fight the VC who they see as a non-indigene.

Unfortunately, such development is unhealthy for the system because it will make the system to suffer and Ekiti and Nigerians will be victims of such unwholesome development,”  he said.

Also speaking during the press conference, Prof. Shola Omotola who is the Chairman of Forum of Concerned Academics (FCA),  denied all allegations levelled against the institution.

The ASUU Akure zone had alleged the institution of pension deductions, students paying extra for practicals, undue hardship, victimization of critics and failure to investigate allegations of salary fraud against the Deputy Vice-Chancellor among others.

Omotola suggested that the way out is for ASUU NEC to resolve the lingering crisis.

“ASUU at the national level is upright in their dealings, but there is a shield between FUOYE and Akure, NEC is being fed with huge lies, and it has been acting on the lies ASUU Akure feeds them, NEC should then come down to FUOYE to find out the truth and not just rely on lies from Akure zone.”