Home News Let the elite rise up to the occasion 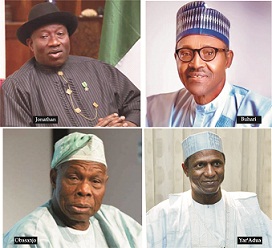 Let the elite rise up to the occasion

By Theo Adebowale
|
Whatever your ideological preference, the PDP years would remain indelible in your memory for the noise and the bravado. Each time election was around the corner, chieftains of Peoples Democratic Party (PDP), were fond of boasting that they would capture states, or votes. And capture they did. Before everyone of us, electoral victories were announced or denied, and the captured voters accepted their fate. Except in the period when President Yar’Adua was in the saddle. The man captured my heart, not the way his party men captured states and votes. To start with, he declared that the elections that brought him to office were neither free nor fair.

From thence, everything started to fall in place. The Network News of the NTA became more objective than they were in the years when OBJ was in charge. Security officials were more civil. It was no longer like they could be summoned to level a human settlement. Officials of the ruling party shouted less of ‘owo agbara’, power. Sanity was palpable while impunity became unfashionable. That was in the months when Yar’Adua was President.

Then his infirmity. The president became scarce in public functions. Initially, it was like he was carving a new image for the Presidency. Then, the rumours, his health, trips abroad. More speculations, the cabal. Intrigues all over the place. Eventually the man died and there was a new man in charge. The new helsman was too grateful to the kingmakers, whoever they were. The party was more interested in projecting its symbols and slogans while the chieftains shared the spoils of office, a legitimate thing whenever it is within the purview of the law.

Whether in charge, or in crisis, the Nigerian nation was not bothered by any of the socio-economic challenges so much to engage in intellectual discourse. True, some issues came to the fore like militancy you would expect the political class to facilitate a robust debate to develop from there. But never. Rather, a quick-fix kind of solution was provided and promptly implemented by the State. It was in the process that Asari Dokubo and his men came to recognition by Obasanjo Regime, and then by the succeeding government of Yar’Adua which paid compensations, and ‘settled’ them.

The major problem of ecological degradation was swept under the carpet. Absence and decay of infrastructure was relegated as militants were pacified. In the years of Dr Goodluck Jonathan, it was time to assert dominion of a minority in the seat of power. Because in this part, the institution is secondary while personality is worshiped, it was six years of reminding the people that the man in the Presidency was from the minority. No policy measures were put in place to consolidate that regime as the President’s kinsmen, and the ruling party adopted different strategies to prolong his stay and not in a few engaging in self-contradiction. Whereas Peoples Democratic Party had made a public declaration to retain presidential powers for 60 years, Ijaw militants dared Nigerians to vote against their own and bring Nigeria to an end. Spokesmen of Ijaw did not only threaten political parties other than the PDP but actually threatened all other Nigerians to vote GEJ and live. The middle class went on holidays all this while. For sure, there were articles in the electronic and the print media examining and analyzing topical issues but definitely no discourse of a national proportion.

When the government of President Goodluck Jonathan decided to debate issues relating to restructuring Nigeria, a few people thought it would be a platform for addressing fundamental challenges to the state of Nigeria, but by the time the agenda was disclosed, only a few were deluded from thinking that it was an arrangement to share the booty and attract cheap press attention. The government that convened the multibillion naira National Conference did not find a single resolution of the Conference to implement. What a pity? And in the course of time, the party which had boasted to preside over the affairs of Nigeria and Nigerians for 60 years came crashing at the polls in the sixteenth year of the Peoples Democratic party, when Dr Goodluck Jonathan was President. It was to the eternal credit of that government that its party could no longer capture power but was eased out peacefully. At the time, the economic atmosphere had been darkened and its operators were definitely overwhelmed.

President Muhammadu Buhari had the misfortune of becoming President when the economy was in a shambles. The government has Boko Haram to contend with, over 100 of about 280 Chibok school girls shipped out of their school in the years of Dr Goodluck Jonathan remain in captivity while the insurgents successfully shipped out another set into Islamic extremist bondage in the years when President Muhammadu Buhari is in power. More painfully, herdsmen are on the loose with their own species of banditry, kidnapping and raping girls and women, over running settlements and vandalizing farmland. Sadly enough, the intelligentsia, the elite political and economic could not find their voice; they could not draw out the Nigerian state for interrogation. The elite could not initiate a public debate on the state of the nation, talk less of setting an agenda to situate Nigeria in the global village in which less endowed political units are already transforming their economies and enhancing the social worth of their nationals.

The Nigerian state evidently confused and stranded is popping up with embarrassing concepts like ‘hate speech’, revolution, to discredit opposing views and clamp down on protesters. For a democratically elected government in the mold of a progressive party this is not an acceptable development. Nonetheless, it would have been a miracle for a government under the pressure of economic recession, an expanding army of unemployed youth to fold its arms and allow distraction. It is the responsibility of the middle class to rediscover itself and mobilize the people to identify with the state in the face of tremendous threats to her sovereignty by socio-economic challenges and fractitious tendencies. Nigeria is in dire need of fresh ideas to revive the economy within cultural diversities of constituent groups and indigenous loyalties to communities.

Within the arts and cultures exist primitive ‘scientific’ practices and technological competencies that modern information, technology and communication skills can propel into an economic revolution. While we remain cap in hand for proceeds from petroleum (and the new discoveries in the North East), the modern world has discovered several alternatives in nature, in plants and waste. The new discoveries and many more mysteries reside in the bellies of our customs, proverbs, yes, proverbs, woods, artefacts and festivals waiting for expression.

The intelligentsia, traditional and modern elite must rise to the occasion to highlight the socio-economic challenges and direct our energies to searching out the solution. Border closure may prevent easy flow of goods from outside and boost revenue in the immediate, alternative locally discovered solutions would only come when the people have been guided to locate wealth within.