Life of a drunk 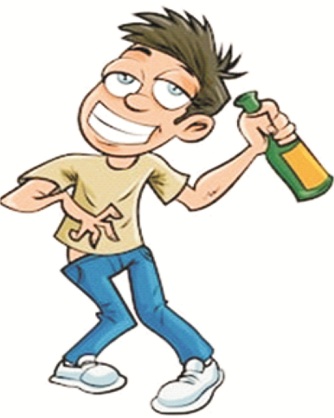 Life of a drunk

By Sunmola Olowookere
|
Pa Amadi has gone on a drinking spree with his cronies again. Indeed it was one of those times when he would stumble home drunk.

Amadi is a retired driver. After active service, he now works for a septuagenarian who goes out once in while. He lives to satisfy his whims. He is uncontrollable whe he needs a drink. Like the biblical king Solomon, he never denied himself any thing his heart desired; be it women or booze.

From his heydays, he had been a heavy drinker. He was a government driver so he was careful enough not to drink during office hours. However, he and his cronies drank their fill in the evenings.

On this particular day, he was drunker than usual; if there was ever such an expression. There was no one out of the cronies who was a little bit sober. They were all as drunk as skunk.

They left the beer parlour. one after the other. Pa Amadi felt he had not had enough beer. So the others left, he staye back He had been managing spirits such as schnapps, alomo, eru jeje all in sachet form.

Even those that left early enough were already tipsy, none of them left as they came.

However, when pa Amadi would leave, he was so drunk that he cleanly forgot that he came with his motorcycle.

The  bar attendants who understands how his mind works after a full session with the bottles did not bother to remind him that he came with a motorcycle.

He staggered home whistling merrily. He was usually a stern looking man but on days like this, he is a very jovial man.

It was a good thing that he left his motorcycle at the bar or else it would have spelt doom for him. He was too gone to control himself, let alone a device. In his inebriated state, he would have had an accident with his motorcycle.

Though he fell many times but he made it to his lane. However, he could not make it to his house. He stopped at his neighbour’s door and banged on it. It was around midnight. They asked who was at the door, there was no answer.

Various terrible thoughts were passing through the couples’ minds.

Could it be kidnappers?

Then they heard the person at the door stagger backwards and slumped to the floor. They rushed to the window and could now see the terror at their door.

It was a man. He lay on the floor unmoving. They could not tell whether he was sleeping, tired or dead. Had he been shot? They however heard no shot being fired.

They could not come out because they were afraid that it could be a ploy by their midnight visitor to lure them outside their house in order to gain entrance inside.

They tried to call their neighbours. While some of them had put off their phones, other were not picking up their calls. They seemed to be enjoying their beauty sleep.

After some minutes, the husband summoned courage and opened the door in spite of the wife’s urging that he should not. He moved towards the body on the floor.

He was still immobile. He grabbed a stick and prodded the man sharply until he stirred. By then, the wife too had gained courage and joined her husband outside.

She shone the torch in her hand in the man’s s face and they both gasped in shock as they recognized the intruder “Baba Amadi!”.

They were very angry. It was their next-door neighbour. They could see he was drunk as usual and he mistook their door for his and their backyard for his bed as e sprawled there in a drunken stupor. And apparently tired, he had slept off.

The husband guided him to his door, took his key out his pocket, unlocked his door and put him to bed.

To their amazement, he had no recollection of what transpired the previous day. He greeted them normally and went on his way.

The life of s drunk is pathetic indeed. If he had slept off in the middle of the road and was hit by an oncoming car the previous day, that would have been the end of it.