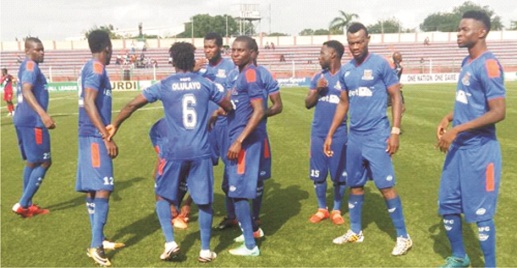 By Femi Atolagbe
|
A spirited second half display failed to help Sunshine Stars come back from a Sikiru Alimi’s first half goal as the Owena Whales slipped to a 1-0 defeat against Lobi Stars in a week 14 Nigeria Professional Football League tie in Makurdi during the week.

The lively encounter that was decided  at the Aper Aku Stadium in Markurdi saw some openings for both sides, as Ayo Ojo gathered from an Alimi’s acrobatic volley in front of goal and at the other end, Ayo Ojo blasted inches wide with a superb half volley of his own from the edge.

Ayo Ojo had to be at his best in the 8th minute to deny Alimi from point blank, while Seun Sogbeso made a decisive goaline clearance on a goal-bound ball in the 27′ as the hosts, buoyed by the home support continued to turn on the heat.

Sunshine Stars went close to getting the opener in the 35th minute when Daniel Barnabas released Anthony Omaka with a teeing header, but the midfield dynamo’s effort was deflected just wide.

Lobi finally had their nose in front when Samad Kadiri who appeared to be in an offside position crossed for Alimi to bundle home against his former side at the stroke of half time for 1-0.

Sunshine Stars looked rejuvenated returning from the break, but the much improved final period showing from the Kabiru Dogo’s charges was not enough in the end as Alimi’s strike proved decisive for Lobi Stars.

With the result Sunshine Stars remained 9th on the log with 16 points ahead of a rescheduled week two meeting between the sides in Akure on Thursday.