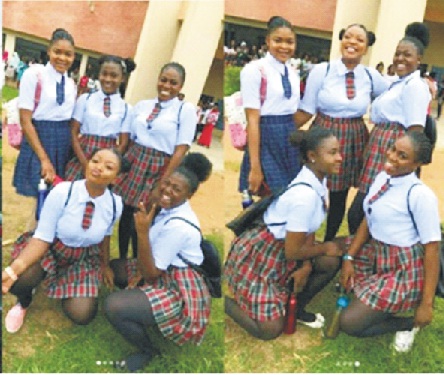 Sema (not real name), a 17-year-old Senior Secondary School 3 student of a public school was confirmed to be two-and-half months pregnant last week. According to her, she was treated two weeks for malaria fever before her mother took her to see a medical doctor when her health did not improve. It was later confirmed through the tests conducted that she was pregnant.
Sema with teary eyes blamed her condition on the lockdown occasioned by coronavirus which exposed her to the opposite sex while hawking groundnut in order to assist her mother. Her words,” if schools had been in session, this would not have happened to me. Even if we resume now, I do not think I will be able to go to school. My dream of becoming a nurse is shattered. Why did I put myself in this mess when I am about to sit for my senior WAEC? My parents are not happy with me,” she lamented.
Sema is not the only teenager who have been put in the family way during this lockdown. A visit by this writer to a private hospital to greet a sick friend on Tuesday July 28, which happened to fall on the antenatal clinic day, bore credence to the unexpected, as five of the 11 pregnant women at the clinic as at 9.47am were teenagers. One of them who was reluctant to talk but gave her name as Ebun said that she completed her secondary school education last year and was seeking for admission before the outbreak of coronavirus.
She further said that she never knew she was pregnant until two months ago, when she took ill and started vomiting. ”My elder sister told my parents that I must see a doctor and after the test, I was confirmed to be pregnant. Since then, my parents have been at loggerheads, as my father warned me to steer clear of him that he does not want to set his eyes on me, calling me a disappointment. I am now living with my elder sister,” she said.
“On who was responsible said that it was a commercial driver in her area. ”My daddy felt disappointed in me because he never thought I was having anything to do with the man. I blame myself and the lockdown for what happened to me. If not for the lockdown, I would have secured admission and be in school.”
Also Titilope, another pregnant teenager who hawks fish along Oba-Ile road, refused to give her age but could not more than 18 years, said, she was learning tailoring which she combines with hawking.
When asked who was responsible for her pregnancy and her parents reactions said, ” a mechanic close to my house was responsible and that he is ready to shoulder the responsibility. My father is dead leaving my mother with three of my siblings to cater for. Since my mother discovered that I am pregnant, she has not been happy with me. Though I would have wished to complete my apprenticeship before getting pregnant, but since it has happened, I will accept it as my fate,” she said.
Also confirming the increasing rate of teenage pregnancies during the lockdown, a nurse, who works in a government hospital but craves anonymity, while speaking with The Hope disclosed that they have been recording increased number of teenagers coming for antenatal as a result of school closure. While advising parents to do more to protect their teenagers especially females she said,” we are disturbed as parents, seeing teenagers between ages 14-18 attending antenatal and they keep increasing. It is most annoying that some of them got pregnant for men old enough to be their fathers. These are girls whose parents are struggling to give good future. I will blame parents for not doing their job, because some of the teenagers interviewed revealed that men had carnal knowledge of them when they were hawking.”
Another nurse, Mrs Dare, also condemned the increasing rate of teenage pregnancies during the lockdown and charged parents to teach their girl-children sex education early. She said,” I have been very disturbed about the COVID-19 period, because school closure have cut off girls from their teachers and most of them are not positively engaged because some parents who claim to be busy left the girls at home with predatory family members and neighbours who turn them to sex objects.
”It is painful seeing teenage girls who should be more preoccupied about their futures coming for antenatal. We have good number of them we attend to. This calls for concerns because these are people who are not financially, emotionally and psychologically prepared for motherhood. Some of them became pregnant for their so-called boyfriends who are also dependants. The implication of this is that if schools remain closed, many of them can still fall victims of unwanted pregnancies. It is sad because if care is not taken, victims of teenage pregnancies can be affected negatively.”