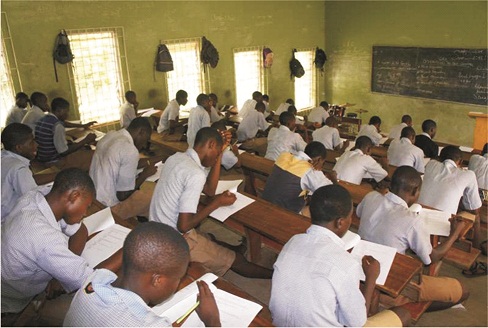 Dr. Isaac Oladipo
|
The Ondo State of the Late 70s and the 80s use to say “Education is our industry here”. Truly then, Education was about the singular index of measuring the performance of governance in Ondo state. Many people outside Ondo state use to believe that there is at least a university graduate, if not a Ph.D holder in every family in Ondo state. Then the state use to come among the first 5 in the performance in WASSCE result and the level of performance in the credit passes in core subjects like English language, Mathematics, and the sciences proved that Ondo state was indeed an educationally advantaged state.

The trend was running on that smooth course until something went wrong. We cannot run away from the fact that our children, aided by some mischievous interests who were all out to over bloat their profile, or simply wanted to take advantage of our loose society, started patronizing ‘miracle centres’ to pass WASSCE. Yes, many of them recorded “brilliant success” with many distinctions and credit passes in their registered core subjects. But when asked to write a simple statement “Original copy received by me” at the point of collecting their statement of results, then the bubble bursts. The ripples of fraudulence persisted and many of them could not cope with the demands of tertiary education studies. This writeup is not interested in dwelling much on what we did wrong. Rather, our focus is how to explore the potentials of education industry to the advantage of our social, infrastructure and economy of this state.

Let me throw a bit of light on this discussion by bringing in the story of California State. California is not just a big state, but it is said to be the richest among the 52 states of USA. It is said that California contributes up to 30 percent of the total dollar contributions to the federation account of America. The state is home to may blue chip giant industries like IBM, Microsoft, Google, Yahoo, Facebook, etc. all of them taking their spouts from the Silicon Valley. Other industries like the film industry solidly planted in the Holy Wood, the betting and gambling industry of Las Vegas, many finance, human capacity development, agriculture, HiTech industries, state of the earth transportation system, inland water ways, railways surface and subsurface, entertainment and security system, to mention but a few, litter ever nuke and cranny of California. It will be interesting to know that a rarely known institution called Sanford University was and continue to be the engine room of all these and many yet unmentioned developmental achieved in California. I want to quickly confess here that I don’t know the detailed workings of the involvement of Sanford in the development of California state. However, the Dutch process of infrastructure development may not be too far from how Sanford supports California state.

In Netherlands, I was told that whenever a major infrastructure project is to be developed, the government will send the idea to major institutions in the land. The heads of the institutions will mandate the appropriate department or unit to come up with the design of the project and the financial implication. The institution will present the design proposal to the government who convene meetings of all stake holders. (Using “dualization of Akure-Ado Ekiti road” as an example such stake holders will include the community along the road Iju, Itaogbolu, Jegele, etc. the road users e.g. NURTW, the road law enforcement agencies, like FRSC, Highway Patrol, Police, construction companies, construction/building materials suppliers, farmers/market women, students and so on). The meetings will have a holistic view of the impact of the project before a final draft is produced. Compensation will be paid to whose life style will be affected and those that will be completely relocated will be so effected. These meetings are very important so all the necessary factors like the societal activities (market, celebration, etc), human behaviours, road users’ excesses, weather, environmental issues, etc. will be factored in during the design. This will ensure that nothing will disturb the smooth execution of the project once it commences and nothing will cause a major distortion of the finished work once it is commissioned. We all see the embarrassments the emergency installation of bumps on our major roads in places like Ogbese, Owo, Itaogbolu, Owena, and the recent one around Oyarugbule market in Akure is causing. The resolutions of the meetings will be given wide publicity thereafter, the contractor will be mobilized as budgeted and the flag-off will be done. With effective project management design and tools, the feasible date of completion will be visible to everybody in Netherlands. Therefore no one complains about any form of disturbance as a result of on-going project in any part of Netherlands. I want to believe without any proof that California state and Stanford University work through that similar process.

Ondo state cannot continue to remain on the list of states owing workers salary. Enough of the continuous hues and cries over monthly federal allocation shortfall. We cannot continue to hinge our development on external borrowing or foreign intervention. The time to leverage on our own endowment for uplifting our state to the top rank is now.

We may take a clue from the decision of India in the late 50s and the whole of 60s to embark upon mass education. This was a fallout of the view of the leaders of India then who were resolute to recue themselves from the imminent collapse to which their economy was nose diving. It was not just mass education, the policy was to massively and aggressively engage all Indians, particularly the youth, in science education. Even those who could not cope with the regular science curriculum were given lesser version. In short no one was left out. Within a space of 10 years there was a flood of top class scientists and mathematicians in India. The government had to encourage them to look beyond their shores for gainful employment. This made Indians scattered all around the world eking life out of thin air. I am one of those who passed through Koochuaha, our gentle Chemistry teacher. They hardly could make ends meet. They go out every day in the same weathered dresses. But tough time never last. Today, that policy that looked like “Gas Chamber Matching Order” is placing India on the acme of technology and economic breakthrough. Many small-scale family-run industries are all over India making wave in the software development, ICT, Engineering, Technology, book writing and publishing on science, technology, engineering and management subjects. Today, India is proud of her Institute of Technology popularly called IIT. One of the leaders in India said, ‘Nations exchange goods and services across international market boundaries. But India exports nothing to USA order than Human resources’. It was reported that over 60 % of five-figure income earners in the Silicon Valley are Indians. Below is a passage directly lifted from the Wikipedia site about IIT Delhi:

“Placements: For the last 3-4 years, the average salary package offered was around 12 LPA to 13 LPA. Last year, the highest package offered for computer science students was 36 LPA. The salary offered for an electrical student was 14 LPA. Many companies like TATA, Birla, Reliance, Adani, and multinational companies like Google, Microsoft, Amazon, etc., visit the college and conduct interviews before the written exam and then select the students”(https://www.shiksha.com/university/indian-institute-of-technology-delhi-53938).

Ondo state is having: 4 Federal Institutions; FUTA, Fed Poly Ile Oluji, Adeyemi College of Education and FECA.  4 state owned institutions; AAUA, OSUSTech, UniMed, RUGIPO. 3 Private Universities; Elizade University, Achievers University, Westley University, and a few up-coming ones. Each of these institutions has the potentials to become another ‘Sanford’ and/or ‘IIT’. I mean, Ondo state can proudly prop on 11 notable institutions and be elevated 10 times higher than California and export 10 time the number of human capital to the world market than India. It is an aberration to be told that our graduates are employed or should be ’empowered’ to ride commercial motorcycles. There must be a total turn around in the way things are done in our institutions. The curriculum must be reviewed to contain the ingredients of what will prepare students to match his counterparts anywhere in the world. New ‘in-market demand’ programmes should replace moribund ones. The new technology is making goods and services delivery more efficient, precise and cost effective. Robotic, Artificial Intellegence, Big Data, Block chain, Smart systems, Deep thinking, etc are what drive manufacturing and service delivery these days as against what was obtainable in the 70s. It is a known fact that many routine jobs will be wiped away very soon. Hence, the education had skewed against Polytechnic education that was targeted at middle level manpower production to fit into routine jobs. Why producing what you know will not sell?

So, our Institutions in Ondo state should be re-engineered to take a new route, equipped with a new tool to be able to compete at the education market of the future. The education providers in the institutions should be challenged to imbibe a new work culture, get better equipped, get new knowledge and update themselves to be able to deliver the needed stuff that will lead to high quality graduates. Nothing stops Ondo state from meeting up and even overtake Lagos State in the field of economic and industrial development. Ondo state have the capacity to create a wide leading gap above other states in Nigeria using the education industry weapon that gives us a comparative advantage. But, we must be ready to apply the needed discipline, become more committed, depart from the unproductive yet wasteful methods, do the needful in restructuring and repositioning our institutions for a more productive posture and be ready to pay sacrifices. There and then our institutions could be challenged to ideate a product/service good and strong enough to transform the economic landscape of the state. Such idea should emanate from the mill of purposeful research and be holistic enough to pass the management SMART test. Following the Dutch model, the government should facilitate projects around the ideas, monitor the progress using dedicated monitoring organ to ensure cost effective completion of the projects. The ideation process should be a continuous exercise to keep the state wisdom box forever full.