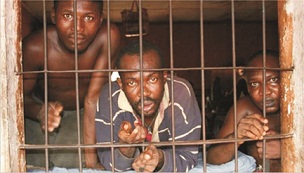 By Olaoluwa Omolafe & Damilola Origbemisuyi
|
Operatives of the Ondo State Police Command have dragged a 32-year-old man, Oluwaseyi Oladapo, before an Akure Chief Magistrates’Court for allegedly stoning an old man, thereby inflicting pains and injuries on his body.

Oladapo,who claimed to be a painter, was said to have conspired with one other at large, to unlawfully stone one Emmanuel Oyeleye on his head and left leg on  August 15, 2019 at about 8:30am at Omoniyi Estate, Akure.

The charge sheet read in part, “That you, Oluwaseyi Oladapo, ‘m’ and one other at large on the same date, time and place in the aforementioned Magisterial District did unlawfully assault one Emmanuel Oyeleye, ‘m’ by stoning him and inflicted injury on his head and left leg and thereby committed an offence contrary to and punishable under section 355 of the Criminal Code Cap 37 Vol. 1 Laws of Ondo State of Nigeria, 2006.”

The defendant,who is facing two counts bothering on conspiracy and assault, pleaded not guilty to the charges.

Mr. T. Sunday, the defence lawyer, who did not oppose the application for adjournment, therefore, prayed for the bail of the defendant in most liberal term.

He canvassed that the offences committed by the defendant are bailable offences under law.

Meanwhile, the Chief Magistrate, Mrs O. R Yakubu, granted the defendant bail in the sum of N200,000 with two sureties in like sum.

Yakubu said one of the sureties must be a civil servant on at least, grade level 8,  She said the sureties must be responsible members of the society and must be gainfully employed, while they should present passport photographs, National I. D cards and evidence of tax payment.

She adjourned the matter till October 22, 2019 for hearing.