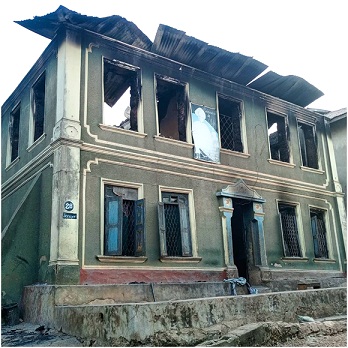 The Hope Metro gathered that the man deliberately locked himself in a room and set the house on fire in the old house located in the Odojomu in Oloruntedo area.

It was learnt that he came from Lagos to celebrate Christmas and New Year with his family , before he committed the act.

The victim was  rescued by neighbours on the street and rushed to the hospital, where he later died. Also, the building was razed down, before the men of the State Fire Service arrived the scene.

An eyewitness, who is also the wife of the landlord, Mrs Sabaina Ogundeji narrated to The Hope Metro; “In  the morning, Ojo set fire under the staircase of the house and said nobody should  put it off. But with the help of people on the street, it was put off.

“In the evening, everybody was outside playing. So, Ojo  went in and brought out his clothes and set them on fire. He later went inside and locked himself up in the room and set it on fire. It was his voice we heard when he was shouting. People ran there to force the door open and brought him out. But he later died in the hospital.”

Also, a man who does not want his name mentioned in  print said, “ When we rescued Ojo, he was not yet dead. He told us that he set the house on fire because some people  were making jest of him because of his problem.

“His remains has been deposited at the morgue in the state hospital, Ondo,” he said.

Confirming the incident, the police at Enu-Owa division said that a man in Odojomu came to report the incident.

Police, therefore, urged the general public to be more vigilant in their homes or offices to save their property from being destroyed by unnecessary fire outbreaks or situations where someone threatens to set house or office on fire.