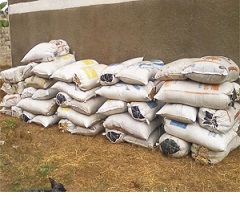 The State  Commander, Mr Haruna Gagara disclosed  this to The Hope Metro in his office  yesterday.

The Hope Metro learnt that the accused who specialised in drug trafficking is of Benue State origin.

Gagara, who spoke through the Public Relations Officer of the agency, Mr Wilson Okechukwu, Superintendent of Narcotic, said the accused was arrested at 1.30am in his house after a tip off.

He said the agency has already strategized  on how Ondo State would be rid of illicit drugs and psychotropic substances.

He said  the middle aged suspect had arranged the cannabis sativa in a nearby bush very close to his house when he was arrested.

Gagara said  some  of the  cannabis sativa were compressed like loafs of bread to be ready for trafficking.

“As I speak to you now we have men who are part of the exercise crocodile smile who are working to ensure that the state is free from the challenge.

” This arrest made in Uso has gone a long way to reduce  drugs which would have been carried to other place. This is dangerous to the society particularly during this ember period.

“As you know there is no end in the fight against drug abuse,  our men are on ground raiding the black spots in the state.

The PRO explained that between now and the end of the year, his men would remain on ground together with other sister agencies on the Crocodile Smile IV exercise going on in Okitipupa.