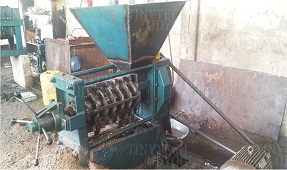 The convict was brought before Magistrate, Mrs Ruth Olumilua, on four count-charge of conspiracy, theft and cell breaking.

According to the prosecution, the convict committed the offence on the August 27, 2019, at about 5:30pm along Akure/Owo express way, Oba-Ile in the Akure Magisterial District.

The convict was said to have stolen one Palm kernel machine valued at N250, 000 and one iron signpost valued at N15, 000, property of one Omirin Adekunle.

The convict pleaded guilty to the four count-charge when it was read to him.

The police prosecutor, Inspector, Martins Olowofeso, said, the convict was detained in police custody for stealing palm kernel machine on August 25, 2019, but on 27th, he had constructively made a large hole in the  cell of the Nigeria Police Headquarters and attempted to escape before  night workers rearrested him.

The Investigative Police Officer(IPO), Mr Ebeghe Ijowei, of Oba-Ile division  attested to the fact that the convict tried to escape from the cell as his head was already out of the wall. “Immediately he saw me, he quickly moved his head back into the cell, he said.

However, the convict told the court that he did not escape from the prison. He said, he stopped creating the hole when a discharged inmate told him that he could be implicated.

Counsel representing the convict, Mr Francis Balogun, urged the court to temper justice with mercy. And prayed the court to grant his client bail in the most liberal term.

After series of argument from both the prosecutor and the accused counsel, the court held that the convict actually committed the offense, and deserved  to be thought a lesson which will serve as warning to others.

The convict was sentenced to seven months in prison with an option of N50,000 fine.