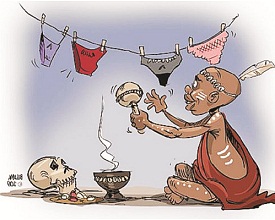 By Sunmola Olowookere
|
Money ritual is a practice that is rampant in African societies. Many who could not be patient enough to wait for their time have had to seek evil ways to make money.

Such a ritual which had gone wrong and brought dire consequences is making residents in our neighbourhood to be on tether hook.

As the world over celebrates the year end festivities and residents fetes one another for being lucky to have made it through the tumultuos year end into a brand new year, a lane in our neighbourhood is thrown into anxiety and mourning as a man died after a mysterious ailment.

He was a benefactor of many people in our neighbourhood. He was very rich; richer than some well to do residents who have been acting like they were gods on earth. When this rich man came, he made their comfortable homes to pale in comparison as he built a duplex within seven months.

Everyone was shocked speechless at the speed in which the edifice was built. Some claimed that he must be an armed robber to possess such incredible wealth.

Within the next few months, the building was replete with a massive gate and imposing design in the front. It was a building to behold. As the Yorubas would say, it was “ile a wo, si fila”. Literally translated, it means a house that would make your cap to fall off.

Within the year, he moved in to the house with his family members. He had four children. He brought menacing looking dogs when he came to live in our neighbourhood. The two foreign dogs were very temperamental and ferocious looking.

Whenever they were tied to the gate,they would bark at every passersby. Like the man’s children, they rebuffed every overtures of friendship made to them by the children in the neighbourhood.

They were so ferocious that they could bark at a piece of paper floating in the wind. Whenever the children take the dogs for walks, concerned mothers would keep their kids indoors. Those dogs looked like Tigers that could tore one to pieces at the slightest provocation.

Remember that I told you that their father had made the other wealthy residents to look inconsequential, soon he became the champion in our neighbourhood. However, to his credit, he was not arrogant. He was a very jovial man.

Hence people began to flock to him as he was very generous. He was soon made the chairman of the Landlords’ association. He was practically forced into it as he did not display any ambition.

The other landlords claim that they wanted him due to his humility. But we all know that it was because he was wealthy. If it was for humility, there were people of little means who could have been chosen among the landlords.

As soon as he accepted to contest, all other landlords eyeing the seat simply withdrew and supported him as if they never had interest in the seat before. It was a drama to behold. But who would blame them?.

Money, power and generosity are powerful combinations to contend with. Since he became the chairman, he paid half of the money used to repair the damaged transformer. Residents had been contributing money for the repair and the project had been dragging.  He was praised for helping out.

Other projects in our neighbourhood moved with lightening  speed. He would not wait for people to finish contributing money before they would start any self help project in the neighbourhood. He had no interest taking a chunk out of the money contributed like other chairmen before him.

Hence he would recoup his money when they all contributed. And when the money falls short of the expected capital, he would simply brush it off and moved on.

Also, end of the year parties in our neighbourhood became a carnival. It was most often solely funded by him. People were very happy. This is a very generous chairman, they reasoned.

Before whoever does pay his contribution will not get a share of the food, but this time around things were different. Everyone was encouraged to eat lavishly during the party. The youths would drink and merrily dance into the night.

However as all these was going on, some sections of the residents of our neighbourhood refused to take any part in being recipients of the chairman’s generosity. His source of money is questionable, they maintained.

Majority on the other hand felt that they were merely jealous of the new chairman hence their views were not popular.

Then strange things began to happen, two kids whom he was assisting the parents to sponsor died at the point of going for their service year. It was a hellish time in our neighbourhood as adherents of different faiths embarked on aggressive prayers.

Soon, it became revealed that they were used for money rituals. All suspicious eyes turned to the chairman. Now majority of the residents began to reason with the few that had cautioned people about him since the beginning of his advent into the neighbourhood.

Seven years on, they are now wary of the man. Most residents that practically slept on his doorstep before now avoided him like leper and people only talked to him as a matter of necessity. The next end of the year’s event was a disaster as most landlords boycotted the party on one pretext or the other.

He was clearly seeing the handwriting on the wall that he was no longer popular. He began to make enquiries of what he did wrong.

He was flabbergasted when he learnt of the rumours. He visited his erstwhile friends so they could talk it.  He denied ever being involved in a money ritual. They told him that they did not believe in such nonsense. They assured him that no one was avoiding him and told him not to believe that people were running away from him.

Some months after this, the man took ill. His illness was such that they did not allow any neighbour to see him and he died two weeks after the onset of the illness.

Residents were shocked. The rumourmongers began their pastime again. It was rumoured that his tummy swelled up like a pregnant woman before he died.

Some even claimed that he was covered with sores and cried at night. Even if one did not want to believe such tales, the question is why was his illness shrouded in such secrecy?