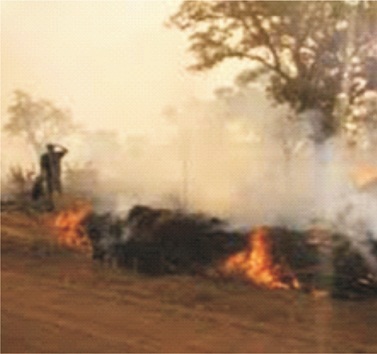 By Tola Gbadamosi
|
It was a sad day for families and friends of a 44-year-old Godstime Okojii, who was burnt to death  during a bush burning in his garden in preparation for the planting season.

The man who was said to be suffering from epilepsy  fell into the fire during the sudden attack of the epileptic seizure.

The Hope Metro reliably gathered that the  incident which occurred last week at about 11pm at  Orisunmibare community,  Idanre in Idanre local government area of the state has set the whole community in mournful mood, as they kept wondering why he had the attack at that particular point in time.

The burnt and lifeless body of the deceased  was reportedly found in the garden beside his house.

There were speculations that Okoji, must have had a seizure, and as a result fell in the fire and died, as a result of the first degree burnt he suffered.

Unfortunately, when the incident occurred, none of his family members was  at the scene to rescue him.

The deceased was reportedly found inside the burnt grasses by one of his family members who went  to check on him.

Police source said the case was immediately reported to the Police by The Olu of Orisunmibare.

Meanwhile, Okoji’s body has been removed  and deposited at the State Specialist Hospital mortuary, Alade – Idanre,  for autopsy, while  investigations are still on going.