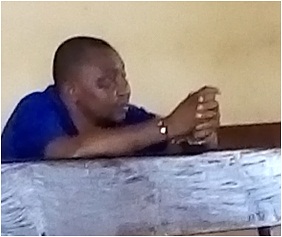 A 45 -year-old man, Gabriel Oyelana has been arraigned before an Odigbo Magistrates’ Court over alleged N498,000 fraud.

Oyelana, who was brought before Senior Magistrate D. O Ogunfuyi on a count charge of fraud, pleaded not guilty to the offence leveled against him.

According to the prosecution, Oyelana committed the offence on February 10, 2022 at Idimango quarters in Ore.

The prosecutor, Inspector Usifo James, told the court that the defendant fraudulently obtained a cash sum of four hundred and ninety eight thousand naira from one Olabode Olasupo, with the promise that he would  process and supply him palm kernel which he reneged.

Usifo, however, prayed for an adjournment to enable him study the case file.

The defence counsel,  Mr B. D Adedugba did not oppose the prosecutor’s prayer. But he prayed the court to grant the defendant bail in most liberal terms.

In his ruling, Senior Magistrate D. O Ogunfuyi, admitted the defendant to bail in the sum of N200, 000 with two sureties in like sum

He, however, adjourned the case till October 11, 2022 for mention