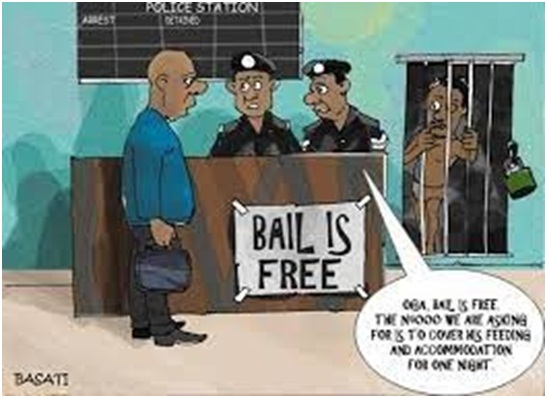 A father-in-law has brought his entire family into disrepute when he gave out the land he had sold to his son-in-law to another client. His daughters were so ashamed that they dared not show their faces.
The whole family was shocked at the ugly development. The young men had discovered an ongoing project on their plot of land when they went to check on it. It had been a while they went there last.
To say that they were shocked was an understatement. They went to confront their father who claimed that it was a mistake on his part and that he would rectify it.
Although they did not believe him but they decided to give him the benefit of doubt. However, their patience ran out after six months and they did the unthinkable. They got their father in law arrested.
The whole neighbourhood practically hummed with the scandal. How could a man defraud his sons in law? It was simply unheard of. He lost the meagre vestiges of respect that the young men had for him as their father-in-law.
Actually, residents in our neighbourhood have always been wary of the father-in-law. We all knew what he was capable of.
This is because he was notorious for selling a parcel of land to two or three people. It is like bringing two rams to drink water from the same vessel. Definitely, the vessel would be torn from their impatience.
His penchant for this fraudulent act has often caused rancour in our otherwise quiet neighbourhood. Some were civilized enough to seek redress from the court while others who were under no such compulsion attacked themselves with their fists and dangerous weapons.
Whenever he needed money, he would simply grab any land he had sold and sell it out to another unsuspecting customer especially those that had no structure on it yet.
Despite this negative popularity, he was not ashamed. With ill-gotten proceeds, he acquired one wife after another.
He has the penchant of squandering his money on the newest catch and the woman would believe that the sun rise and set on his head with the lavish attention.
However, by the time the woman moves in, the lavish attention would petered out as the money finishes and she would realize that she had been taken for a ride. By this time, they were usually heavily pregnant or with a little baby.
The ensuing bitter of the new wife would push him into the arms of another woman outside and the rigmarole would start all over again. Currently, he had three women leaving under his roof while four of them had moved out.
The present predicament was that fate had tempted him into selling the plot of land he sold to his son-in-law and they were ready to drag their money out of him. They were struggling young men and they had hustled hard to get the money to buy the land.
Hence they saw red when they learnt that their father-in-law who ought to support and encourage them had sold off their properties. The situation got ugly after some months when he could not repay the money.
They decided to get him arrested and he was locked up almost a week at the police station as the young men were adamant that he would rot away inside the prison unless he produced their money.
It was a hellish week as the daughters were helpless and powerless in the face of their husbands’ wrath. They grew to know their father as a fraudster.
It was a regular occurrence for people to besiege their home screaming in outrage and calling for their father’s head after he must have defrauded them. It is either he sells off someone’s plot of land or sell an already occupied plot of land to another.
However, they never thought he would stoop so low as to do it to their husbands. His siblings had to rally round to raise the money. They were in for a shock when the police demanded for money for bail upon request for his release.
He was already sick inside the cell and they had to sell his car to raise the money. Most of his wives were unsympathetic towards his plight.
It was his last wife who was so concerned and was running up and down like a headless chicken in order to take care of her “heartthrob”.

When madness runs in a family