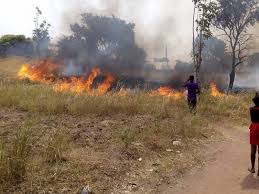 From Fasusi Martins, Okitipupa
|
A Magistrates’ Court sitting in Igbekebo, Ondo state, has sentenced a middle-aged man, Friday Omoboh, to two years imprisonment for burning 561 bunches of hybrid palm-fruits on a farmland.

Omoboh, who was arraigned on six counts charge was said to have conspired with others now at large to destroy and burn the farm belonging to one Nosiru Adefioye, on September 23, 2017, at Ojigbobini in Ese Odo local government area of Ondo state.

The Hope Metro learnt that the convict, an Arogbo man  and his gang allegedly entered the farm with some dangerous weapons, including local gun and forcefully  collected some of the working tools , like rain boots, spraying machine and chemical used by the workers .

Thereafter, the suspects were said to have  set the farmland ablazed.

The police prosecutor, Sergeant  Olumide Martins, stating the facts of the case in the Police First Information Report (FIR), told the court how the victim came to the police station on the fateful day to report the incidence.

He gave an account of how the accused was  arrested and his statement taken under caution.

Martins said the defendant and other members of his gang destroyed about 561 stands of hybrid palm trees by cutting them with cutlass.

The offence was said to contravene Section 451 of the Criminal  Code Cap 37 Vol. 1 laws of Ondo state of Nigeria 2006.

He explained the efforts made by his team to visit the scene of the crime and how pictures of the burnt farmland were taken. The pictures  were  admitted as part of evidence by the court.

One of the victims, Segun Monebi, told the court how the accused stopped him from taking his palm fruits from the forest by demanding  the sum of N50,000 from him, as  marching ground fees.

The defendant was arraigned on six count. But he pleaded not guilty to all the charges  did not deny asking for N50,000 from Segun Monebi.

In his judgement, the Magistrate,  Mr Tope Aladejana, noted that the accused and his terror gang have constituted threat to the people around them by their conduct.

” I believe nobody is above the law and nobody is allowed to take laws into his hands,” he  noted.

The court therefore, found the accused  guilty of the 1st ,2nd , 4th ,5th and 6th counts and convicted him.

But he was discharged and acquitted on the 3rd count charge.

His lawyer, Mr E.E Ojugbulu, who pleaded that the defendant is a first offender, asked the court to temper justice with mercy.

He said the defendant is an orphan who is also married to an orphan.

Consequently, he was sentenced to two years imprisonment on counts 1,2,4,5 and 6.

The court held that the sentence is to run concurrently or in the alternative, he should pay the  victim the sum of N140,000, as compensation in line with Section 291 of the Ondo State Administration law of Justice Act 2006.