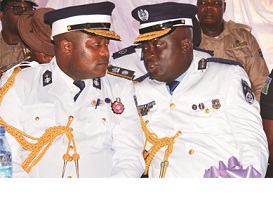 By Olabanji Kayode
|
Individuals who have distinguished themselves in their various field of endeavours and who have paid their dues within the rank and file of the Ondo State command of Man ‘O’ War have been decorated as Patrons and Advisers.

During the event held at the Man ‘O’ War Headquarters, Akure, the State Commander, Commandant Adeniyan Adeleye congratulated the newly decorated officials for their recognition on service to humanity.

According to him, the investiture was the first of its kind in the history of the State Man ‘O’ War.

While congratulating the newly decorated Patrons and Advisers, he urged them to do more.  Adeniyan assured the state government of its readiness to continue to maintain law and order.

He however highlighted some of the needs of the command which included the provision of utility vehicles, office furniture, funding among others.

The chairman of the occasion, Chief Tunji Adeleye called on the government and the people of the state to help in equipping the command as they are out to serve humanity and contribute meaningfully to the development of the state.

Reacting, the chairman of the Patron of the Man ‘O’ War, Ondo State command, Mr. Dayo Aregbesola, said the recognition was indeed a call to serve, while pledging his continued service to humanity.