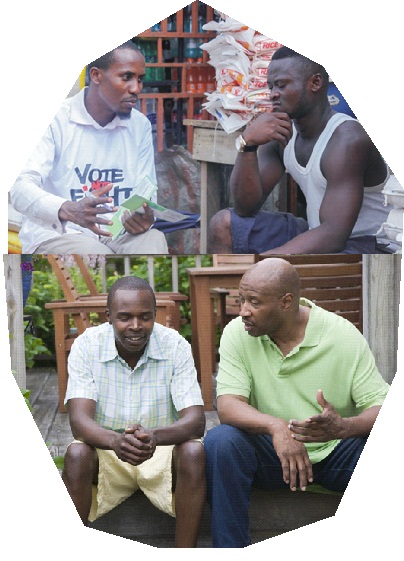 It is not strange at all to have friends. Almost everybody one will come across has at least a friend. In the neighbourhood, at school, in the work place and even in the place of worship, usually, one would have at least a friend.

Friends would eat, play, talk and do many things together. Friends are also known to be of help to one another in a time of need. That is why an adage says that a friend in need is a friend indeed. The meaning of that adage is that friends help one another.

Another thing that is common among friends is to share secrets with one another. An individual will usually confide in his or her friends. In a time of trouble or confusion, it seems not to be out of place to seek refuge in the advice, care, concern and assistance of a trusted friend.

Such was the case of Olayinka, a young man in his early thirties, who had two friends named John and Seyi. Aside being friends, they were also living in the same neighbourhood. As good friends, the three of them used to discuss personal issues with one another. Simply put, they were one another’s confidant.

One day, the three of them gathered to chat, as usual. This time, Olayinka had something very important to share with them. “What could that be?” John and Seyi wondered. The news or gist was that Olayinka wanted to buy a brand new motorcycle, worth N360,000. He wanted to confide in his two jolly friends before going ahead to make the purchase.

Olayinka thanked his friends for their advice and words of encouragement, resolving to go and buy the motorcycle the following day, as there was no time to waste. Soon, the three of them dispersed, hoping to meet again the following day.

Being an artisan, Olayinka went back to his work after the conversation. After a hectic day, the young man went to bed tired. Like an expectanct groom, he went to bed expecting the day to break. He could not wait to see his brand new motorcycle arrive.

Lo and behold, as Olayinka slept in the night, he noticed the presence of strangers in the house. Some individuals, armed with cutlasses and pistols had found their way into Olayinka’s room by breaking the window and entering through that route. Their act was made easy by the fact that the victim’s window had no burglary-proof metal.

Olayinka woke up, startled by the sight of the attackers numbering six. What could be the mission of these men of the underworld? They were not too slow to disclose their mission, which was to dispossess Olayinka of the money he wanted to use to buy a brand new bike the following day.

“How could these people have known that he had so much money with him in the house and was planning to buy a motorcycle the following day?” The victim wondered, but the answer readily came as he looked into the faces of his attackers and saw that two of them were his friends, John and Seyi, whom he had confided in earlier in the day. Olayinka was able to recognise his two friends because they were unmasked.

Unable to hide his surprise, Olayinka called their names. Seeing that their cover was blown, the two friends struck Olayinka with their cutlass which hit him on the head, very close to his left eye. The assailants were able to trace where their victim kept the money meant for the purchase of the motorcycle. They made away with it and his phone, alongside some other valuable items.

What made it possible for this act to be carried out successfully? It was information. The assailants had good information about their victim and his plan. How did they manage to have access to the information? He himself, that is the victim, gave them every information they needed to execute their plan. How could he be so ‘careless’ as to sell himself out in that manner? The answer is simple, he thought that he was confiding in friends who had good intentions towards him. Is it, then, a bad thing to trust one’s friends and confide in them?

This is a delicate matter because a glance through some real life experiences show that it could be very dangerous to divulge information carelessly about oneself to so-called friends. For example, the stories of Joseph and his brothers and the story of Samson’s experience with Delilah come easily to the mind. Joseph was almost killed by his biological brothers who still later sold him to slavery, because he shared with them some dreams he had which gave a hint that he might become their leader in future. Delilah also helped Samson’s enemies, the Philistines, capture him after she lured him into telling her the secret of his power – his dreadlocks.

What then shall we say to this? That one should become overly secretive, keeping every matter a secret, even when it means dying in silence? Are there no friends like Jonathan again?

Opinions vary on that. For example, Salahudeen Aromaradu, a teacher, posited that it is safer to keep one’s plans secret, as disclosing them could prevent such plans from being actualised, coupled with the fact that evil-minded people could work against such a person.

His words, “I personally don’t appreciate people disclosing their plans to others. I believe it hinders one from getting such desires. It is preferable to keep one’s plan secret until it is executed. To cap it all, some people are devilish in nature. The moment they wish something bad on another person, bad things will start happening to the person. Therefore, it’s advisable to keep one’s plan to oneself.”

Esther Ajayi, a banker, has a slightly different opinion. she believes that even after a plan has been executed successfully, one can still be vulnerable to evil machinations.

“Sometimes, it is good to keep one’s plans to oneself until they are executed.. But what if your friends see what you have just acquired and still come to rob you? It’s better to just have the best circle of people around you.”