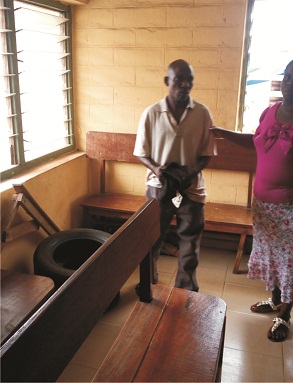 By Kayode Olabanji
|
A 50-year-old carpenter, Tunde Ogunlade, who allegedly defiled an insane, was on Monday remanded in Olokuta prison by the Chief Magistrates’ Court sitting in Akure, the Ondo state capital.

The police brought the accused  person before the court presided over by Mrs Victoria Bob-Manuel, on one-count charge of rape.

According to the prosecution, the accused allegedly committed the offence on  November 12,  2018 at about 11:30am, at New town, Oke-Aro, Akure.

The Hope Metro gathered that the accused person reportedly took advantage of the girl being insane and had carnal knowledge of her.

The offence committed was said to contravene Section 357 and punishable under Section 358 of the Criminal Code Cap. 37 Volume 1 Laws of Ondo State of Nigeria, 2006.

The plea of the accused was not taken.

The police prosecutor, Sulaiman Abdulateef, urged the court to remand the accused person at Olokuta prison, since the court does not have jurisdiction  to entertain the matter.

Abdullateef asked for a short  adjournment to enable him send the duplicate of the  case file to the Director of Public Prosecution for a legal advice.

Lawyer to the accused person, Mr A.Y Ayilu, did not oppose the application for remand made by the prosecutor.

In her ruling, Mrs Bob-Manuel, ordered the remand of the accused person in Olokuta prison custody pending the issuance of the legal advice from the Director Of  Public Prosecution (DPP).