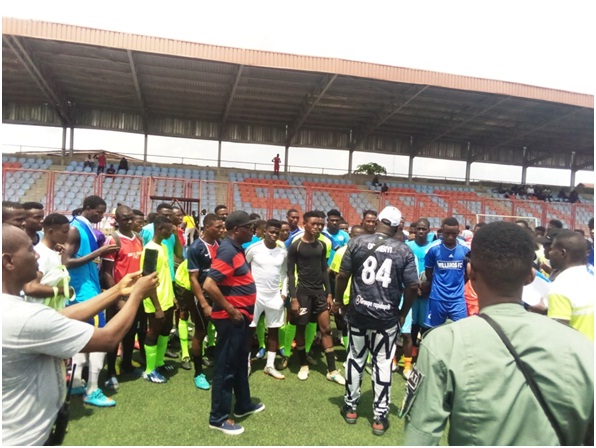 In a bid to create ample opportunity for youths in Ondo State and Nigeria as a whole, the management of Mandot Soccer Stars Football Club have invited over 180 talented footballers across the country for scouting network with international scouts from Manchester City and other European teams.
Preliminary screening for the three weeks exercise has begun at the Ondo State Sports Complex; Akure the state capital, with former Enyimba Captain, Uche Dominic Egbukwu led other ex – players in the technical process.
The programme is in partnership with Ude Sports Management and the final scouting will officially commence on 3rd to 9th of June 2021 at the same venue.
The facilitator of the programme, former Ondo State Commissioner for Youth and Sports Development who also doubles as the President of the Mandot Soccer Stars FC, Mr. Dotun Owanikin said the event was deliberately brought to the state in order to discover budding talents abound in every nooks and crannies of the state for possible transfer to Europe.
Owanikin said, the event would have been more economical if staged in Lagos, but for the love I have for my state, we don’t mind further bills to ensure its held here in Ondo State.
He said the programme will impact very much on our youth and it would also reduce the level of restiveness in the society when they see football as a means of lively hood.
“We are creating a platform for football talents that abound in this country. This have taken us to Lagos, Ibadan, Ife, Abuja, Owerri, Portharcourt, Aba, Calabar and other places; we are here in Akure for the final phase which involves a screening process that will trim the players down to 70 before the arrival of the scouts from Europe.
“My resolve to give back to my state informed the decision to have this programme in Akure, and my team Mandot SSFC which will be starting off in the NLO this year will be based here. Some of these players will be recruited into the team.” The former Commissioner for Youth and Sports Development in Ondo State concluded.
The Sporting Director of Mandot FC and Technical Partner of the scouting network, Mr. Uche Dominic Egbukwu of Ude Sports Management who is prominent for his involvement in transfer of Nigerian players abroad is optimistic that the scouting programme will be a huge success.
“I am convinced that exceptional players are here; we are continuing with what we have done round the states. We are preparing for the arrival of scouts from Europe. Based on what is going in the country we had to convince them before they agreed to come down here.
“The seriousness of the former commissioner encouraged me to partner him on this project. I saw the selfless sacrifice he made for Sunshine Stars while in office and even now; he is a man that wants things work out,” Dominic stated.
The former captain of Enyimba is bringing his international expertise to bear on the programme as he revealed his involvement in the transfer of over 75 Nigerian players abroad. Notable among them are Vincent Enyeama, Dele Aiyenugba, Kenneth Omeruo, Isaac Success, Wilfred Ndidi, recently Akin Amoo among others.