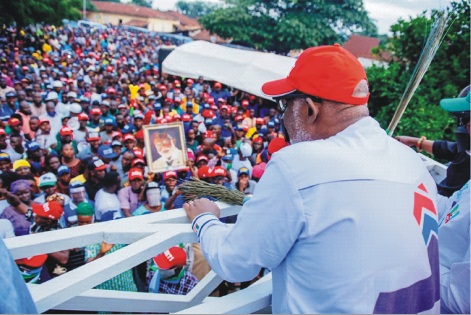 It was massive and impressive turn out of the people in Oke-Agbe Akoko, the headquarters of Akoko North West Local Government area in Ondo North Senatorial District as well as Bolorunduro, the headquarters of Ondo East Local Government in Ondo Central Senatorial District of the state when the Akeredolu/Aiyedatiwa local government campaign train stormed the two local government areas on Friday and Saturday respectively.
The 4+4 chorus and various solidarity songs by the obviously elated mammoth crowd rented the air. The spontaneous jubilation by both the young and the old at the separate campaign venues clearly indicated that the people were truly ready to re-elect the APC candidate and Governor of Ondo state, Oluwarotimi Akeredolu, for a second term.
In the two local governments, drums were rolled out with pumps and pageantry to welcome Governor Akeredolu, his running mate, Lucky Aiyedatiwa and APC leaders including the state chairman, Ade Adetimehin; the Chief of Staff to the Governor, Chief Olugbenga Ale; Akeredolu/Aiyedatiwa Campaign DG, Victor Olabimtan, among other leaders of the ruling APC.
The different acrobatic dances by some masquerades sighted singing “Aketi 4+4” and live bands on ground were another beautiful scenes to behold.
During the campaign at Akoko North West, the Governor and his entourage paid a courtesy visit to the Palace of Akala of Ikaram and chairman of Obas in the local government, Oba (retired) Commodore Andrew Momodu.
The team was warmly received by the monarch and other traditional rulers across the council area who had converged on the Palace.
Speaking at the event, Oba Andrew Momodu, commended Governor Akeredolu for maximising the state potential for industrialization and infrastructural development.
He described Governor Akeredolu as a statesman, noting that the industrial revolution policy of the present government leading to the establishment of several industries has become a reference point while the creativity being employed into the provision of potable water for communities throughout the state through the Kamomi Aketi has become undoubtedly salutary.
The Akala of Ikaram used the occasion to appreciate the governor for transforming the entire landscape of the Sunshine State, just as he lauded the Governor for the establishment of the Western Nigerian Security Network codenamed Amotekun Corps which has brought peace and security to the state.
The campaign train later moved to Oke-Agbe, venue of the local government campaign rally where hundreds of PDP members led by PDP House of Assembly candidate for Akoko North-West constituency II, Muhammed Bankole, officially defected to the ruling APC.
In his remarks, Governor Akeredolu assured that his second term in office would be for completion of ongoing projects, consolidation of sterling achievements and continuity of good governance for the people of the State.
He said viable Agro allied processing industries that will flourish in each council area will be facilitated to generate employment and boost the financial capacities of all local governments in the state.
Akeredolu who described Ondo state as progressive state, called on the people of the local government to work assiduously to ensure landslide victory for the party at the poll.
“I must appreciate you all for voting me in the year 2016. Another election is around the corner, we should not make any mistake to vote PDP. With the level we are now in the state, we must not gamble with the future of the state.
“Ondo State is a progressive state. Those who are in Oyo know what they are facing presently. Ondo State is already on the right path and we won’t allow PDP or ZLP that has no bearing to drag us back.
“Let us go back to our units and wards and begin to preach the gospel on why APC government must be re-elected. APC is the party in government in Abuja, is the party in government in Ogun, Ekiti, Lagos and Osun”, the Governor said.
Also on Saturday, the campaign train was in Bolorunduro in Ondo East where the Governor and his entourage met with traditional rulers, opinions leaders and some members of the Market Women Association with an assurance to embark on more people-oriented projects to further bring good governance to the people of the council.
The APC governorship candidate said in addition to the continuation of the life changing projects of his administration, completion of all ongoing projects, his second term will open up rural communities under the World Bank Rural Access and Agricultural Marketing Project RAAMP, which he said his administration has paid its counterpart funds.
According to Governor Akeredolu, by opening up the agrarian communities across the state, farmers would get their produce closer to markets thereby making them have value for their efforts in feeding the nation and encouraging young persons into becoming Agropreneurs.
According to him, if re-elected for another term in the October 10 governorship poll in the state, more rural road projects would be executed to further encourage farmers and ensure food sufficiency in the state.
The governor assured that his administration would ensure that agriculture and its value chains are made attractive to youths for productive engagement.
Earlier, the Oloja of Mobiiye, Chief Felix Kolawole who spoke on behalf of the people appreciated the Governor for making life better for residents of the local government area through the delivery of many projects.
“What Governor Akeredolu has done in this area has helped us in many ways especially the construction of good roads, the building of schools and the basic amenities too”, he added.
He also pleaded with the governor for more life-changing projects and policies that will make life more meaningful for people living in the council Area.