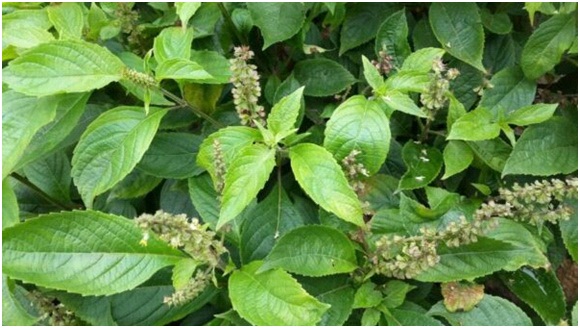 Scent leaf as the name implies is an aromatic leaf. Its botanical name is “ocimum gratissinum”. It is indigenous to Nigeria, Cameroon, Ghana, some parts of Africa and Southen Asia. It is called Efinrin in Yoruba, Nchanwu in Igbo, Doddoya in Hausa and Aramogbo in Edo. It is a homegrown shrub which is usually found in farms and gardens and can also be found in the wild.
It is widely and mainly used as spice for cooking different delicacies due to its aromatic taste. Adding Efinrin to any meal is inviting and will surely get your mouth watering. However, there’s more to this leaf aside the aroma and taste, the plant bears a lot of bacterial, antifungal and larvicidal properties.
Also there are some essential minerals like calcium ,magnesium, Iron, zinc, potassium and phosphorus. It also contains vitamins like vitamin A, B and K and good amount of dietary fiber that makes the leaf to play a noticeable and important role in disease treatment and prevention of infections.
Some of us have been using Efinrin as a relief for stomach upset and piles but it is funny most of us don’t know we have probably been plucking this leaf at the wrong time. Instead, the best time to collect this plant is early hours of the day (morning) when the sun has not risen. Once the sun is out, most of the essential oils which are volatile would have escaped into the atmosphere.
To value the uniqueness of this vegetable, below are the amazing health benefits you might not know or have not heard about Efinrin.
Efinrin contains calcium and magnesium both which aids in the reduction of bad cholesterol and also increase blood circulation. Bad cholesterol increases the risk of coronary artery disease in adults but with adequate intake of this vegetable clogging of arteries can be prevented
For non- Insulin independent diabetes mellitus patients, blood sugar can be lowered by consuming significant amounts of this leaf, the leaves are useful in lowering blood sugar and protecting pancreatic islets that produce insulin from being damaged.
Scent leaf promotes fertility both in men and women due to the high content of arginine ( arginine is an amino acid that is used in maintaining the vitality of sperms and optimum penile, it contains several components that facilitate proper erection. Similarly, the anetol and boron components in this leaf induce estrogen (Estrogen is a category of sex hormone responsible for the development and regulation of the female reproductive system and secondary sex characteristics).
The vegetable can been crushed and smeared on the skin helps to treat fungal infections, it contains antifungal activist against fungi like penicillium chrysogenum, Candida albicans and microsporeum gyseum. The seeds can also be infused for treating urinary infection,gonorhea infection and vaginal douches for vaginitis.
Scent leaf can be used as houseflies, mosquitoes and other insect repellant when dried and burnt, with the components of cinole, camphor, camphor and limonene which are harmful to insects. The leaf play two roles. Firstly, it helps to reduce the occurrence of houseflies and mosquitoes in residences. Secondly, it helps to reduce the incidence of enteric diseases (a disease caused by houseflies) and malaria.
With the antimicrobial properties in scent leaf, it can be used as an alternative and cheap remedy in food preservation. The extracts from this leaf are ethanol based which can help to prevent or delay the growth of fungi and bacterial in food.
Scent leaf is a good source of vitamin A (carotenoid lutein) which promotes good eyesight and also protect you against age related muscular degeneration and cataracts. With the consumption of adequate amount of scent leaf, the deficiency of vitamin A which leads to xerophthalmia (a medical condition in which the eye fails to produce tears and also become dry with inflammation and ridge formation), which when left untreated leads to night blindness can be prevented.
Efinrin promotes oral hygiene by using it as chewing stick which help to kill bacteria in the mouth and also prevent tooth decay and to fight off bad breath.
Drinking a cup of aqueous extracts once or twice daily or consuming the leaf as vegetables gives relief of stomach ache, diarrhoea, chronic dysentery and vomiting. The extracts of scent leaf can also be used to treat earache and colon pains.
Ocimum gratissimum aids proper digestion, it helps in relieving bloating by enabling the digestion process to take place on time, it also makes bowel evacuation easier and also have a calming effect on the stomach when brewed.
The vegetable also serves as a local method of treating cold and cough. It helps in relieving cold and cough due to its rich essential oil contents, it is believed to help discharge thick mucus and relieve sort throat. To use for cold, the leaves are either boiled to drink or inhale the vapour.
Aside its medicinal value, its versatility is also amazing, It can be included in the preparation of meals like beans, jollof rice, pepper soup, yam porridge, peppered chicken, plantain and Igbo traditional delicacies like Isi ewu and nkwobi. This is why it is an invaluable plant that should be available in every households garden.