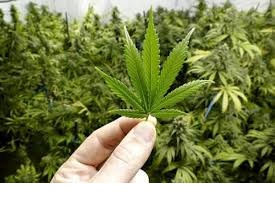 By Adekola Afolabi
|
The Association of Community Pharmacists of Nigeria (ACPN), has drummed support for controlled cultivation and use of cannabis for health and economic benefits in Nigeria.

The National President of ACPN, Dr Sam Adekola, spoke while leading other members of the National and the Ondo State Executive Council of the ACPN on a courtesy visit to Governor Oluwarotimi Akeredolu in his office.

He explained that the association had come for a two-day advocacy on the issue of beneficial use of cannabis to people, and also to visit some of the Governor’s projects sites.

He noted that some people objected when Governor Akeredolu suggested the controlled cultivation of cannabis for its economic and health benefits due to ignorance or lack of vision.

Adekola pledged the support of the National Executives of the association to Akeredolu’s administration to create opportunities in the pharmaceutical sector.

The National President particularly saluted the courage of Akeredolu towards harnessing the economic and medicinal potentials of cannabis, assuring that the association would support the drive and make it a reality.

According to him, the association would take a major step further by collaborating with various agencies and relevant stakeholders as well as engage the National Assembly to enact an enabling law for the controlled cultivation and use of cannabis.

“For us as pharmacists, we have come to take this advocacy seriously and we believe that this project will soon be able to benefit the people of the state and the country in general.

“So many people can be employed through cannabis and the medicinal benefits of this product is too numerous to mention,” Adekola emphasised.

Receiving the team, Governor Akeredolu, called on the leadership of the ACPN to continue on its advocacy and awareness of the positive and medicinal benefits of cannabis plant in the state.

The Governor explained that the drug could also be used to boost the economy.

He noted that the country must look at the path way to controlled cannabis cultivation for economic and health benefits.