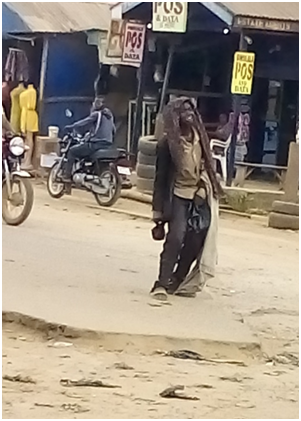 There was a mild drama in Ore, the headquarters of Odigbo local government area of Ondo state mentally ill lady was seen weeping profusely on the street.

The incident which lasted for some minutes happened along Ore-Okitipupa road.

The scenario caught the attention of passers-by along the route, who wondered what could have led to her crying.

Some passers-by who spoke with our correspondent said that the mentally ill might  have regained her sanity.

The Hope Metro gathered that the mentally ill lady who was dressed in tattered clothes spoke incoherently while crying.

The cause of her cry was  yet unknown as at the time of filling this report.