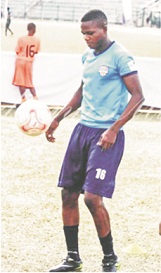 By Femi Atolgbe
|
Mountain of Fire and Miracles Ministries FC (MFM FC) are to release Adeniji Adewole Kabiru to Sunshine Stars for a loan deal worth N2 million ahead of the 2019/20 Nigeria Professional Football League (NPFL) season.

MFM FC and Sunshine are expected to reach an agreement for the loan deal of Adeniji who joined the Lagos-based team from Fabulous FC before the commencement of the 2018/19 season for two years.

Adeniji made his first appearance in the apex league in Nigeria last season for the Olukoya Boys when he came on as a substitute for Michael Ohanu and scored his first NPFL goal after connecting a cross from Tunde Azeez.

The former Stationery Stores of Lagos forward became an integral member of MFM FC under Fidelis Ilechukwu last season scoring five goals in about 16 appearances as a rookie in the Nigerian top flight.

If the deal between MFM and Sunshine Stars falls through, the striker would be recalled by the Lagos side.