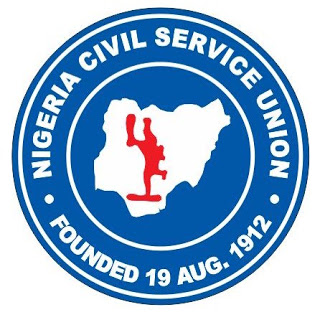 By Olusola Alatise
|
The Nigerian Civil Service Union, (NCSU) has vowed that organised labour will vehemently reject any attempt by the Federal Government to introduce economic policies including tax increment that will deny workers of the benefits attached to the new #30,000 minimum wage.

The National President of the Union, Comrade Lawrence Ameachi and the Ondo State Chairman, Comrade Ademola Olapade gave the indication during the inauguration of the newly constructed Relaxation Centre named “NCSU Bar” located at the Union’s State Secretariat, on Oda Road, Akure.

The NCSU President Represented by the Deputy President, Comrade Sunday Adeleye, insisted that hike in fuel price, higher taxation and other policies that could affect negatively the purchasing power of workers as a result of the new wage, would not be accepted by the organized labour in the country

On the inaugurated project, the NCSU President commended the Ondo state Executives-led by Ademola Olapade for justifying and expending members’ funds prudently.

“I want to appeal to the Nigeria Labour Congress President in person of Comrade Ayuba Wabba and other labour leaders in the country to stand firm  tat issue of VAT increment and any other economic policies that will affect the new minimum wage should not be acceptable from the Federal government”.

I am very happy with the State governor Arakunrin (Oluwarotimi) Akeredolu, our members who are workers are very happy, the governor has done the best thing by agreeing to pay the thirty thousand naira new minimum wage without allowing the issue to lead to industrial crisis”.