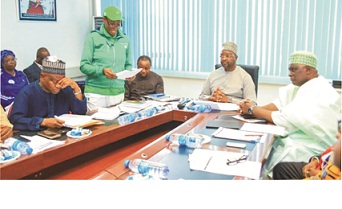 By Femi Atolagbe
|
The Minister of Youth and Sports Development Mr. Sunday Dare yesterday met with the Ministerial Advisory Committee and Presidents Federations of Sports who willing represent Nigeria at the Tokyo 2020 Olympics games.

The meeting which was held at the Media centre of the National Stadium in Abuja, was aimed at preventing a repeat of the last two outings international outings among which was the London Olympics in which no medal was recorded.

Setting the agenda for the meeting, the Minister stressed the need for the Ministry and the Federations to maintain a common ground in order for Nigerian athletes to give Nigeria a worthy representation at the Olympics games.

“It is important we meet and have a time frame. We need to be on the same page to prepare for the Olympics. We are going to create a feedback system beyond this meeting and  have a similar meeting down the road to ensure to smooth running of Olympics.”

Lists of athletes who have qualified for the competition and those that are yet to qualify were made known, including the mandatory sports for qualification to the international event.

Other items that were deliberated upon are; the budget allocation  and accreditation processes for the games.

The Minister also briefed the attendees on the stages of mobilization of funds and sponsorship for the event.

It would be recalled that at the last Olympics, only one bronze medal was recorded in football and none from athletes. This the Minister said has necessitated a timely meeting of Federations and continuous feedbacks to put plans in place for for a better outing at the Tokyo Olympics.