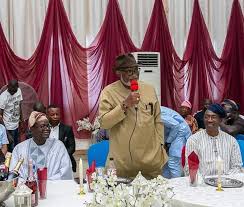 By Bisi Olominu
|
The Governor of Ondo State, Arakunrin Oluwarotimi Akeredolu, the Deji of Akure, Oba Aladetoyinbo Aladelusi and the Okiti of Iju, Oba Amos Farukanmi have applauded the nomination of Senator Tayo Alasoadura as a minister of the Federal Republic.

Alasoadura is from Ondo Senatorial district of the state.

In a statement by Akeredolu’s Senior Special Assistant on Media and Publicity, Ojo Oyewamide, he expressed confidence in the ability of the Iju-born politician to discharge assigned responsibilities, just as he lauded President Muhammadu Buhari for the wise choice.

“Undoubtedly, President Muhammadu Buhari has made a wise pick in Senator Alasoadura, who has demonstrated over the years, an unquenchable desire for excellence, hard work and commitment to assigned responsibilities.

“Having had an eventful and memorable stay in the Senate, Alasoadura provided what could be regarded as an immeasurably valuable representation to his people.

“It is, therefore, without any iota of doubt that Senator Alasoadura will bring to bear his rich pool of experience to galvanise the needed support for Mr. President’s Next Level Agenda,” the statement said.

In a joyous mood, the Deji of Akure, Oba Ogunlade Aladetoyinbo lauded the president for picking Senator Tayo Alasoadura as the minister representing Ondo State, saying that this is what Akure has been waiting for a long time.

He congratulated him and wished him best of luck.

Also reacting, the Okiti of Iju, Oba Amos Farukanmi described Alasoadura’s nomination as a good development for the state and in particular that a son of Iju will be picked to be minister representing the entire Ondo State.

”I am happy because Alasoadura is from Iju and in Nigeria today, the town has become important. A few months ago, he was a Senator of the Federal republic of Nigeria and today has been nominated to be a minister in Nigeria. We are very lucky and we thank the president for remembering us in this area”.

The ministerial nominee for Ondo State, Senator Alasoadura said that his nomination as a minister is another call to service.

Alasoadura in a press statement made available to The Hope and signed by his media aide, Dayo Joseph assured of his total support to the government of President  Buhari.

His words: ” My nomination as a minister is yet another call to service at the executive level. I want to assure that all my wealth of experience over the years will be employed to ensure adequate support to Mr. President in his quest to reposition the nation on the part of total recovery and progress.

He however craved the support of the entire people of the state,particularly the Governor of Ondo State, Arakunrin Oluwarotimi Akeredolu whom he described as forward looking, hardworking, non relenting goal getter and strong believer in the Nigerian project.

He promised to deliver fully on the ministry to be  given to supervise, assuring Nigerians that he will do his best working with the president and his team to improve the economy.