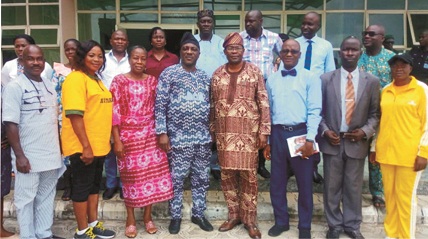 By Femi Atolagbe
|
Ondo state Ministry of Youth and Sports Development and the State Oil Producing Areas Development Commission (OSOPADEC) have resolved to partner for the development of aquatic sports in the state.

The agreement was sealed at a meeting held at the OSOPADEC office in Akure, the state capital, the two government establishments are to constitute a committee to walk the talk on the initiative.

Commissioner for Youth and Sports Development Mr  Dotun Owanikin, who led the management staff of the Ministry to the office of OSOPADEC said it’s high time aquatic sports were developed in the state, saying there had been a blueprint for aquatic sports in the state  especially in swimming since the creation of the state.

He said despite the challenges of training facilities facing aquatic sports, representatives of the state at competitions have not done badly, adding that aquatic team of the state recently won one gold, three silver and one bronze medal at the just concluded National Youth Games in Ilorin.

He added that OSOPADEC as an organisation saddled with the development of riverine areas has a comparative advantage to help develop aquatic sports such as swimming, sailing,diving,Canoe-Kayak,flatwater racing, water skiing, rowing, sculling and others ,because their mandate areas are blessed with talented youths and rivers.

Owanikin who enumerated the importance of sports in the society and the need to catch them young therefore solicited the assistance of the commission to encourage inter school sports competitions adding that sports provide job opportunities and help to arrest youth restiveness.

He briefed the commission about the next year National Sports Festival in Edo state as he wanted both sides to build on their strengths to make the synergy work effectively.

Responding, the Chairman of the Commission, Mr Gbenga Edema, who appreciated the Ministry’s initiative, expressed the readiness of the commission to collaborate with them, stressed  the need to develop the youth through other platforms.

He urged the Ministry to also synergize with individuals and nongovernmental organisations as Government alone cannot develop sports.