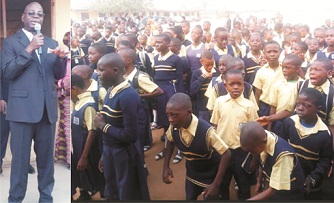 By Bukola Olamona
|
As public and private schools resume in Ondo State, there have been mixed feelings about the turnout of students in the urban and the rural areas.

The State Commissioner for Education, Science and Technology, Mr Femi Agagu made the observations while monitoring resumption of schools across the state.

He described the low turnout of students in the rural areas as a problem that needed urgent solution.

“It’s like, it is a tradition, so we need to find the root cause and also look for the best way to tackle it,” he said.

The Commissioner who said that it has been established that the number of school days available in this term might not be enough to cover the syllabus which could compound the problem of teaching and learning.

He therefore called on the parents who are the ultimate beneficiaries to cooperate with the government in ensuring their children and wards comply with the guidelines given to them.

He said” If government has set a time table for resumption, there must be a reason for that because it knows what is best for them and for the system, there is the need for them to follow the guidelines “.

He said all hands must be on deck as the stakeholders work together to ensure that the facilities available would be able to support the teaching and learning for the students be able to be in their best this year.

In an interview, the principal of Idanre High School, Alade-Idanre, Mr Ige Ebenezer who was happy with the turnout of both the teachers and the students in his school.

Also, the principal of Ebun Ogunyinka Comprehensive College, Idanre, Mr Ade Adegboro who decried his students low turnout said the reason could not be farfetched as 80 percent of the students in the area are wards to peasant farmers who are non indigenes.

He said he had made consultations with traditional rulers, PTA, to help intervene but the problem persisted, adding that he had also made the non indigenes part of the PTA so as to solve the problem, hoping to see  positive result.