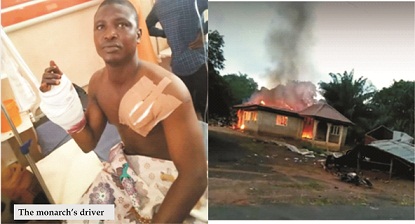 By Tola Gbadamosi and Fasusi Martins, Okitipupa
|
The traditional ruler of Araromi-Obu, Oba Aderemi Adelola narrowly  escaped being killed by suspected hoodlums, as they attacked him on his way from Akure, Ondo State Capital for an official engagement .

The first class monarch, according to residents, escaped death by a whisker, as his vehicle and entourage were attacked by suspected hoodlums who were laying claim to Ago Alaye land in the community. He and his driver, were  however, said to have sustained injuries.

Speaking on behalf Araromi-Obu Development Union, the President, Senator Omololu Meroyi, to The Hope Metro confirmed that two people had been killed and eight persons injured while five houses were burnt at Ago-Alaye, a community in Odigbo council area.

Meroyi, in company of Prince Olu Falolu, Bisoye Monebi and Taiwo Adedimeji said the Araromi-Obu people have been under severe attack by their Ikale neighbours over the judgment of an Akure High Court that ceded part of their land to Ikale people.

His words, “Our experiences have been bitter in the last two weeks. Some people want to drive us away from our land. These people were born in Araromi Obu. They live with us and never claimed to be landlords.

“There is a court judgment that ceded our land to Ikale people. Rather than wait for the law to take its course, these people have taken laws into their hands.

“We will not cede an inch of our land to anybody. We are ready to defend our land with our blood. Local Government people can no longer work. They invaded our land  and prevented our people from going to farm. We are being suppressed in our land.

“It is not that we cannot fight back. But we did not want to contribute to the security challenges in the country. We appeal to men of goodwill to come  to our aid before the situation gets out of hand, he pleaded.”

According to him, “the Monarch of Araromi Obu is the 18th Ajobu of Araromi-Obu. There is no where in history it was said that the Ikale people came to install monarch on our land. We can not allow this kind of brutalization to continue,” he added.

Meanwhile, the Caretaker Chairman,  Okitipupa Local Government, Hon. Abayomi Adesanya and  the Abodi of Ikale land, HRM. Oba. Gabriel Faduyile had called on the people of Ikale Communities and the Araromi Obu community to give peace a chance over the land dispute that ensure between them which was orchestrated by the recent court judgement.

They made  the appeal during separate chats  with The Hope Metro as regards the lingering crisis.

While describing the conflicts as ‘disheartening and unnecessary’,  they both reminded the communities that no struggle over any peace of land is worth the life of anyone.

The LG boss appealed to all the subjects to maintain status quo and give peace a chance pending the determination of the appellate court.

In his words, ” I am appealing to all the subjects to maintain law and order, so as to avoid loss of lives because you can’t compare anything with life. ”

”As the local government chairman, I am appealing that everyone should maintain peace, we have been cohabiting in peace for a very long time, I don’t want it to escalate further than this”

He assured that the state government would employ all necessary means of finding amicable and sustainable solution to the dispute.

He also promised that the government would continue to take measures that would guarantee the welfare and security of lives and property of the entire citizens.

In the same vein, the Abodi of Ikale land, HRM, Oba Gabriel Faduyile, urged the people to maintain peace, and  go about their lawful activities without any fear of molestation.

” It is true that there was land judgment in favor of the Ikales, and an attempt to enforce the judgement by the Ikale people led to  reaction from the Araromi Obu community ”

I had that a lot of people were wounded especially the Ikales and they are receiving treatment already.

I want everyone to maintain peace, we have been friends, we have intermarried, we school together. Therefore, issue of of land should not be used as a weapon to separate us,’’ he said.

However, the Police Public Relations Officer (PPRO), Mr Femi Joseph, said the situation has been brought under control.

He said mobile and  local policemen from the Okitipupa Area Command have also been drafted to the area to complement the team.

Joseph said, ” I am aware that they are fighting but we have drafted our men to the area to restore normalcy. Some people have been arrested by our men in connection with the crisis.