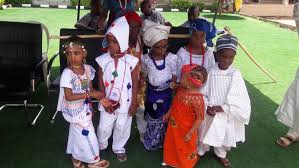 |
As schools in Ondo State celebrate the cultural day in the state, the Association of Teachers of Yoruba Language and Culture of Nigeria has suggested that the three major languages in Nigeria should be used to teach students in schools.

Speaking in a telephone interview with The Hope, the State Chairman of the association, Mr. Femi Oyelowo affirmed that countries like China, Germany, Spain among others were able to record tremendous development because they are using their languages to teach science and technology.

While saying that government is now realizing the importance of mother tongue to the enhancement of the education system, he noted that the present government in the state has set up a committee saddled with the mandate of fashioning out modalities for using indigenous languages in teaching Mathematics and Sciences in primary and secondary schools.

“We want teachers to teach Mathematics and Sciences in indigenous languages. Hopefully this year, they will complete their work”, he stated.

Oyelowo explained that the cultural day, otherwise called mother tongue day is a United Nations Educational Scientific and Cultural Organisation (UNESCO) programme commemorated every 24th of February to promote languages and culture, saying that the programme was postponed in the state because of the Presidential and National Assembly election.

Charging parents and guardians to make Yoruba a language of communicating with their children and wards at home, he maintained that culture is our heritage and must not be allowed to go into extinction.

“If care is not taken, some languages may go into extinction when people do not want to speak them. Even the illiterate parents do not want to speak it to their children, they are forcing themselves to speak English, even if it is not correct, is that civilization or what!? We must go back to the old days. Our languages cannot be separated from our culture.

“When I came on board in 2016 as the Chairman of the association, I advised the government to allow us to celebrate the day in each school and since then, we have been celebrating it, unlike before when the association only gathered in the state capital to celebrate it”.

Oyelowo posited that the aim and objectives of the programme are being achieved as countries like Malawi, Cuba and Brazil are now speaking Yoruba language adding that “They even made it a compulsory subject and means of communication, because Yoruba people are many there

“They started BBC News Yoruba last year, in the past, it has been only BBC News Hausa, it shows that Yoruba is now a universal language”.

Also speaking, a Yoruba teacher from Akure Muslim College, Mrs. Bukola Olaosebikan opined that no society can survive without culture, hence the need to embrace it.

She added that the importance and significance of the day cannot be over-emphasized as it gives students the opportunity to showcase their diverse cultures through their attires and different activities that reflect it.

Cross section of students who spoke in separate interviews with The Hope informed that they always look forward to the day as it enables them to display their cultural heritage.

The theme of this year’s celebration is “Indigenous Languages, Matter for Development, Peace Building and Reconciliation”.