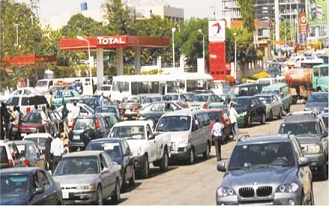 By Evenly Omotoye &  Adekola Afolabi
\
Motorists, commuters and other petroleum users have continued to groan as queues return to filling stations in Akure.

News of looming fuel scarcity filtered into the state capital on Friday as many filling stations closed shops in anticipation of increase in the petroleum pump price.

The situation, however, got worse on Saturday and Sunday as few petroleum marketers dispensed fuel to petroleum users, while many other filling stations hoarded the product.

Queues were noticed in few stations which dispensed to customers, just as some petrol attendants also sold the product, but collected N200 per motorist who bought fuel in the filling stations.

A visit to some filling stations along Oke-Ijebu, Ado road and other parts of the state capital revealed that many stations were closed and refused to sell to customers.

For instance, in Oke-Ijebu Akure, only Matrix filling station was selling fuel while several others in the same axis remained closed. Same situation was witnessed along Ado road as only filling station, Titolu, was dispensing fuel, while others including NNPC closed their stations.

However, the NNPC Mega station at express and NNPC, Alagbaka sold fuel to customers.

But some petrol attendants whose did not sell the product, while speaking with The Hope, claimed that they had sold available product to customers and were waiting for their tankers from depot.

They refuted the hoarding allegations, saying that they did not hoard the product.

Some motorists including Olukoju Oladeji, Tobi Olaniyi and Eniola Samuel who spent hours on the queue before getting the product decried what they called “another unjustifiable hardship on Nigerian masses”. They called on government at all levels to urgently address the situation before it gets out of hands.

Also, two commuters, kaseem Adeleke and Aarinola Omoniyi disclosed that the artificial fuel scarcity is gradually leading to hike in transport fare and appealed to government to save Nigerians from incessant fuel scarcity and its attendant price hike.

Meanwhile, Ondo state government has warned petrol marketers in the state against hoarding the product, saying government would not hesitate to sanction any erring marketers.

A statement by Senior Special Assistant to the state Governor  on Special Duties and Strategy, Dr Doyin Odebowale said any dealer caught hoarding fuel would be arrested and prosecuted while the business premises would be sealed off.

The statement reads; “the Ondo State Government views, with grave concern, the latest attempt by some unscrupulous persons to create panic through the hoarding of PMS, fuel. This assault on decency is coming at a time when the NNPC continues to reiterate facts on the availability of the product. Nigerians have been assured of regular supply of the product and this Government has no reason to disbelieve the organisation.