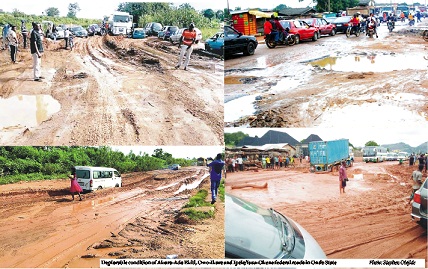 While claiming that the roads are taking tolls on lives and property, they noted that they have also become black spots for armed robbers and kidnappers.

The motorists and travelers told The Hope they travel on the roads with their hearts in their mouths as a result of terrible experiences people share and what some of them had witnessed while travelling.

It was gathered that no fewer than 25 people had been reportedly kidnapped at the various black spots in the past few days on the roads.

While some were lucky to be rescued by  security operatives, others were not so lucky, even after payment of ransom like one Basiru Adekile who lost his life last Thursday.

Another victim, Mr Adekile was among those abducted alongside Oniku of Iku quarters in Ikare Akoko, Ondo state but released after the payment of N3 million ransom.

Adekile was reportedly tortured by his abductors and sustained injuries in the forest before the ransom was paid.

Recent statistics from the Federal Road Safety Corps revealed that there were 218 road crashes in Ondo state between January and June 2022 with 75 fatalities recorded.

Causes of the accidents, as revealed by the corps, were bad state of roads and over speeding among others.

One of the motorists plying Owo-Ikare road, Mr. Azeez Lawal lamented: “I have issue with my tyres almost every day. I work in Oba Akoko and must ply that road. It is really disturbing.

“There was a day I ran into a ditch covered by water. I could not slow down due to fear of being kidnapped and the place was very bushy.

“My tyre burst and my car almost tumbled into the bush. It could have been the end of me because it is a lonely road. I  managed to drive the car to the nearest town to get a vulcaniser”.

He appealed to the federal government to reconstruct the road to prevent avoidable loss of lives and property.

A commercial driver plying the same road, Mr. Bode Busuyi, while lamenting about the terrible state of the road, revealed how one of his colleagues was attacked by kidnappers on the road.

According to him, his colleague was kidnapped alongside some passengers in his vehicle and a huge sum of money was contributed before his release.

“Since then, we travel on the road on high speed despite that the road is bad. We do not slow down to avoid being stopped. It is sad that this is happening on our roads.

“Aside this, we spend a lot of money on vehicles repair because of the road. The tyres, absorbers, hubs and shafts usually get spoilt because of the bad road”, he revealed.

The Hope findings on the state of Akure-Ado road showed that many motorists have deserted the road.

The journey that should take 35 minutes now takes more than an hour.

Travelers lament that robbers and kidnappers take advantage of the road to attack them.

As a result, travelers now go via Igbara Oke road when travelling from Akure to Ekiti.

Residents of communities along the roads have cried out to the government on several occasions to fix the roads due to the dangers they pose to their health, security and general wellbeing.

In a statement issued some days ago as regards Akure-Ado road, Ekiti State Governor, Dr. Kayode Fayemi said the Federal Government had refused to grant approval for the dualisation of the expressway after the affected state governments received funds from the African Development Bank (AFDB) to execute the project.

The statement came after the newly appointed Minister of State for Transportation, Ademola Adegoroye visited the Minister of Works and Housing, Babatunde Fashola, concerning the road.

Fayemi revealed that despite he and Governor Oluwarotimi Akeredolu of Ondo State got approval and money from African Development Bank for the road, the Federal Government refused to cede the road to the two states and “threatened us there will be no refund if we went ahead and tempered with their road”.