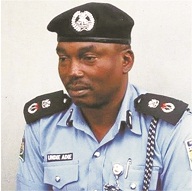 By Michael Ofulue
|
The Ondo State Police Command has reiterated its commitment towards ensuring that all motorists and passengers travelling along major roads that cut across the state are safe and secured.

To this end, the Command said it has drafted more policemen to various check and pin down points especially along Owo/Ifon axis of the state, to check spates of kidnapping and other heinous crimes, as well as ensure that hoodlums do not carry out their dastard acts.

It would be recalled that the former Vice Chancellor of African University in Bayelsa State, Professor Valentine Aleto, was reportedly kidnapped by yet -to- be arrested gunmen and was released few days after some undisclosed amount of money was paid as ransom

The state Police Public Relations Officer (PPRO), Mr. Femi Joseph, a Superintendent of Police, told The Hope Metro that the command is making efforts to track down the criminals.

Joseph hinted that the state Police Commissioner, Mr Undie Adie, has ordered the deployment of crack detectives to all the nipping points, especially along Owo/Ipele/lfon, Ikare/Akungba axis of the state to curb the activities of the hoodlums.

The Command, he said, is currently investigating the circumstances surrounding the kidnap of the Professor  while he assured that the perpetrators would soon be brought to book.

He added that the policemen on routine check-points have been directed to stop and search suspicious vehicles plying the roads, enjoining motorists to cooperate with them adding that all efforts are targeted on the safety of all and sundry.

The Police Spokesman stated, “We have increased the number of our men on the roads. Additional policemen have been deployed to compliment the efforts of the existing ones. They have been instructed on what to do.

“We plead with motorists and passengers to cooperate with them in case of ‘stop and search’ situation. All we are doing is to guarantee the safety of everybody.

“As for the professor that was kidnapped and released, we are seriously working on the matter and I can assure you that the suspects would soon be apprehended to face the full wrath of the law,”he stated.

On whether ransom was paid before the University Don regained his freedom, the PPRO said “We don’t advise anybody to pay ransom to criminals and we are not aware if any amount of money was paid, but I can assure you that we are working to bring those that penetrated the crime to face the full weight of the law.

He, however, appealed to all law abiding citizens to always cultivate the habit of giving useful information to the police, saying the job of effective crime prevention, detection and control is for everybody and should not be left for the police alone.

He equally assured that any information giving to the police would be treated with utmost confidentiality.