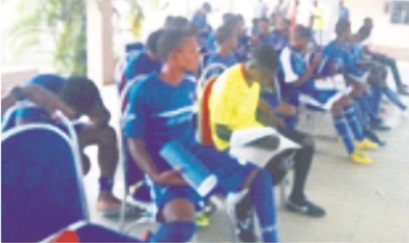 By Femi Atolagbe
|
The Proprietor and Chairman Moyero Football Club, Mr Lanre Moyero has described football and its management as a serious business .

He stated this during the signing of contractual agreement between the club and the players at the ceremony held at Solton hotel and suit in Ijapo, Akure.

The players were given the contract papers home for proper study and return them to the club with their guardian or parent’s approval while they will continue their developmental programs with the club that has been camped at their Ijapo Estate base for over three weeks.

The contract that will bind  both parties for two years was solely handled by the club’s lawyer Barrister Dayo Desmond Adejumola.

According to the Chairman, ‘we decided to sign contract with the players because of our past experiences with some unfaithful players’.

“Yes, football is about passion but I see it more as a serious business and a means to put food on the table for me and my  family, World-over, everybody that is conversant with football will know is no longer a common game”.

His words, “anyone at this time and age who still see football as just a game of fun is still leaving in the past”.

He added that “the club has been producing players for years, but they decided to rebuild the entire team, from management to players, we put in place standard structure for the team and signed new players”.

The club’s chairman therefore charged the newly recruited players to be loyal and faithful saying his management teams will not condone any act of indiscipline from any players.

“Let humility be your watch words, build your foundation  on the rock, let there be marriage between you and your God , if your foundation is of the Lord , you will always excels in your career”.

He added further that  in order to put the players in good shape ahead of their Europe trial, the club has decided to register and participate in the forthcoming Ekiti bet9ja league .

“God willing, the players will be leaving for Europe by July and  preparation are in top gear for the documentation and processing of their visa’s”

The motivating factor for me is that in the last 17 years I have  been contributing my quota to  reduce the unemployment in the country through football by helping young talented Nigerians to achieve their careers both within and outside the shore of the country.

Earlier, a resource person and a grass root football promoter, Mr Oluwatope Ayokunle charged the players to always applied what he called 3D, discipline, dedication and determinations in their daily activities, adding that if put the aforementioned in use the sky will be their starting point.

According to the  Technical Adviser of the club, Mr Bobola Akinfolarin, it’s a rear opportunity for you guys, this contract isn’t forced on any of you , but all I could smell is that the chairman have good plan for you guys”

He urged them not to see the club as Barcelona,Real Madrid or Manchester United,noting  that they should see it as a stepping stone to their career. “No for crazy hair style,no tattoo, focus more on your career , sky will not only be your limit but starting point”, he said.