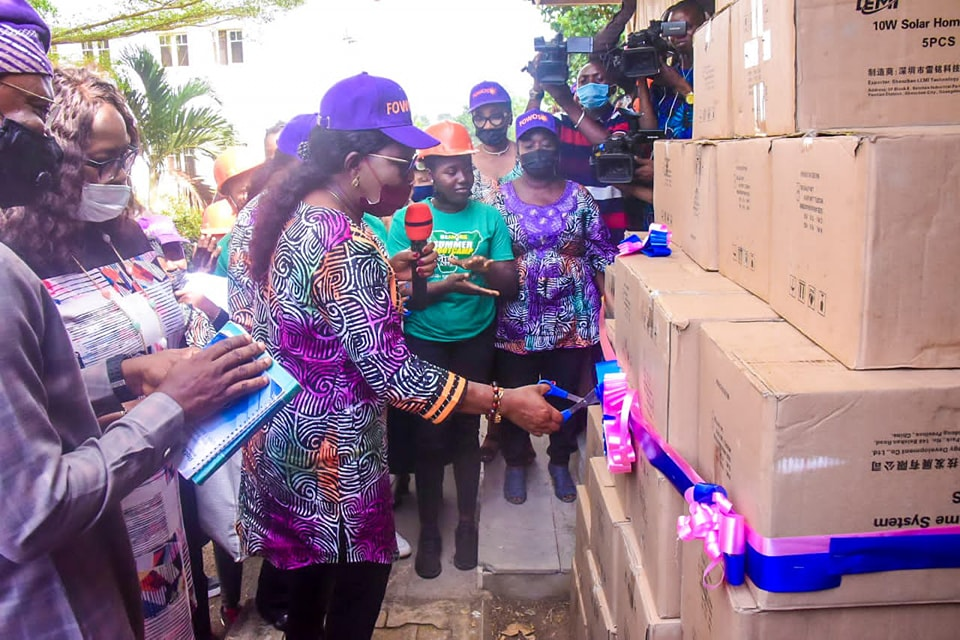 While presenting the systems to women at the Government House, the First Lady explained that it will go a long way to help most rural women have access to electricity improve their standard of living.

Mrs Akeredolu who revealed that her target was to light up 1000 homes across the state added that her BEMORE girls had already light up 300 homes which brought the idea to extend same to rural women.

She said, “This is the first of its kind in the state. The idea is to help rural women have access to constant electricity supply to improve their businesses and standard of living.
I want to thank Gbenga Edema, former OSOPADEC boss for his support concerning any initiative about women and girls in the State. He saw my vision for empowering the girl-child. Today, BEMORE girls are doing great in their endeavours. There is no need getting anyone to fix the solar system, my BEMORE girls are capable.”

Secretary, Ondo State Oil Producing Areas Development Commission, OSOPADEC, Dr Victor Koledoye, explained that Mrs Akeredolu was empowering women and girls to be independent. He thanked the Governor’s wife for her love for women and girls in the State and noted that the state has not been having it this good.

He said, “ When you train a girl, you train the nation. This is what Mrs Akeredolu has been doing. Her target is to light up 1000 homes, if this is done, there will be more development in the State because when there is constant electricity supply, people whose businesses depend on electricity will have more sales and others who are jobless before can think of what to do with the constant electricity supply. It is a good idea that will impact the economy of the state positively. We are grateful for this brilliant initiative of Mrs Akeredolu.”

In her goodwill message, Permanent Secretary, Minisry of Women Affairs, Mrs Foluke Daramola, lauded Mrs Akeredolu for coming up with the idea of giving out solar system to rural women. She also appreciated her for championing women’s cause. She urged the beneficiaries to make good use of the solar home systems.

One of the beneficiaries, Mrs Christiana Oyetan, who described the solar home system received as coming at the right time said: “I am from the riverine areas where there has been no electricity for years. This solar lights will serve as alternative. I am very grateful to Arabinrin Akeredolu and I pray that God will continue to strengthen her to do more,” she said.