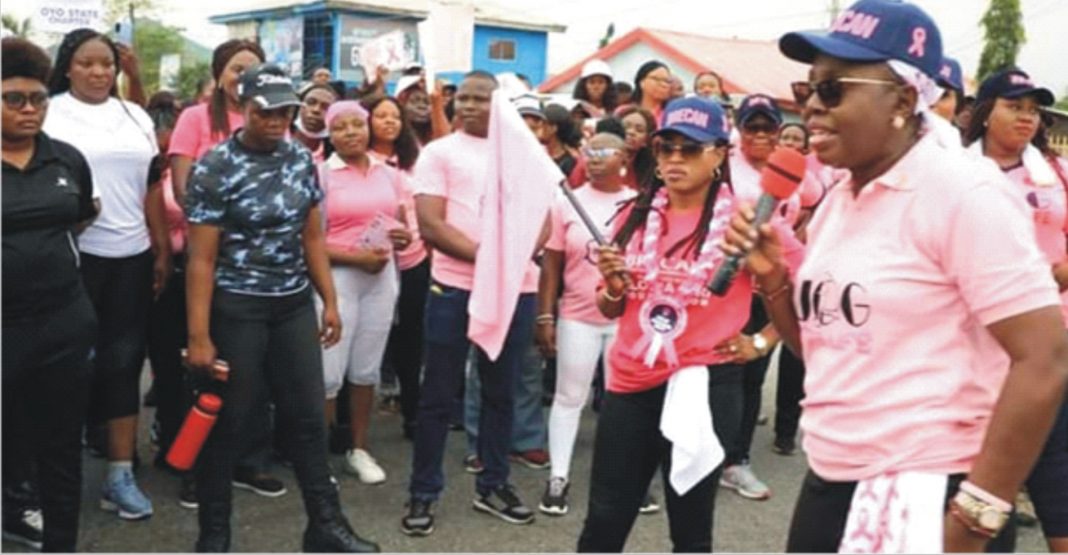 The First Lady of Ondo State and Founder of Breast Cancer Association of Nigeria, BRECAN, Chief (Mrs) Betty Anyanwu-Akeredolu, has inaugurated the Bayelsa state chapter of the association.
The inauguration which makes it the seventh chapter of BRECAN in Nigeria was held at Bayelsa State Banquet Hall in Yenagoa.
The BRECAN Founder, noted that after her encounter with breast cancer over 24years ago, she envisaged an organisation that will champion the campaign for breast health awareness and galvanise action against breast cancer in Nigeria.
She appreciated the Bayelsa First Lady for embracing BRECAN through Gloria Diri Foundation, noting that their collaboration to fight a common cause for women was a signal that they’re sisters beyond political party affiliation.
She said: “The birth of BRECAN, Bayelsa State chapter is special in many ways, it is the first chapter in any state in South-South Nigeria. Even before today’s inauguration, the chapter has embarked on several impressive awareness outreaches. This is quite assuring as it gives credence to the fact that the founding members of this chapter are indeed passionate about the vision and mission of BRECAN which is captured in our slogan; Giving Hope, Saving Lives”.
Mrs Akeredolu, re-emphasised the importance of correcting misconceptions about the disease, and the need to raise the tempo of creating awareness by engaging government and stakeholders to make legislations and policies that would help in the fight against cancer.
In her goodwill message, the First Lady of Bayelsa State, Dr.(Mrs) Gloria Douye Diri, lauded Ondo First Lady for her determination to impact and touch lives through BRECAN.
According to her, Mrs Akeredolu was a shining example worthy of emulation, and expressed her readiness to provide the necessary support for BRECAN to kick breast cancer out of Bayelsa, through Gloria Diri Foundation.
Speaking on behalf of the newly executive members of the association, the Chairperson of BRECAN in Bayelsa State Mrs. Zipuamere Felicia Afenfia, highlighted some of the achievements of BRECAN within the shortest period of its existence in Bayelsa State in May 15 2021, which included advocacy visit to the Ministries of Health, Children Affairs, Schools, Churches and patient support strategy by securing partnership with a radio diagnostic centre (Silhouette Radio) which has given the association 50 percent discount on mammography and breast scan.
Mrs Afenfia, therefore, solicited the support of well-meaning individuals and organisations in Bayelsa state to partner BRECAN and donate in support of the project.
Giving a health talk on “Controlling Breast Cancer in Bayelsa state”, the Consultant General Surgeon, Niger Delta University Teaching hospital Okolobiri, Bayelsa, Dr. Oyintonbra Koroye, advocated early screening in Africa due to the age group of affected patients compared to the western countries who experience it at late stage in life.