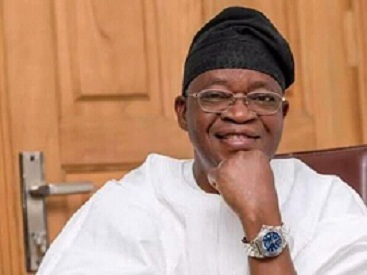 By Fisayo Akinduro, Osogbo
|
The Osun State Governor, Gboyega Oyetola has said his emergence is an affirmation of the promise of Almighty God which never fails.

The Governor stated this on Wednesday in Osogbo while playing host to the Forum of Chairmen of All Progressives Congress (APC) in all the Local Government Areas and Local Council Development Areas in the state.

Oyetola appreciated the party chairmen for the great works done at their various domains which culminated in his deserving victory at the last September 2018 Governorship Election.

He said the unprecedented success of the governing APC at the last general elections is a convincing pointer that APC presently enjoys the legitimacy of the people which confirms its unbeatable strength.

The governor said he never for once had any doubt in the ability of the Court of Appeal to discard the Tribunal’s anomalous judgement and uphold his victory because his emergence is divine as “he who God has made, no man can destroy.”

He assured them that the Supreme Court will do the needful because every evidence on ground shows clearly that the good people of Osun freely and willingly gave him their mandate which he is guiding jealously.

The Governor assured the leaders of the governing APC that he will be carrying the party along in everything he does as someone who recognizes the importance of the platform through which he emerged as the rightful occupant of the number one seat in the Land of Virtue.

In his remarks, the State Chairman of All Progressives Congress (APC), Prince Adegboyega Famodun on behalf of all the Chairmen of APC in all the Local Government Areas and Local Council Development Areas across the state congratulated Governor Gboyega Oyetola on his deserving victory at the Court of Appeal, assuring him that the state party leaders are absolutely committed and loyal to him and the success of his administration.

Famodun assured the Governor that he will emerge victorious at the Supreme Court, the final judgement which he said will rest the matter for life.